ALTHOUGH the Ministry of Culture and Sports named 2016 Yannis Moralis Year, in celebration of 100 years since the artist’s birth, not much has actually been organized so far in terms of events. There was the Moralis Prize that was given this year to artist Panayiotis Tetsis, there was also a talk in Moralis’ hometown of Arta, by the Dean of the Athens School of Fine Arts, Panos Charalambous. But things seem to be heating up now in the summer, with the island of Aegina’s upcoming show of Moralis’ works to be exhibited at the Folklore Museum towards the end of August (and running till mid-September). Other events are also planned on the island, which aim to highlight the artist’s special connection with the pistachio-treed paradise, such as an exhibition with works by his students and friends at the Markellos Tower. Also planned, is the temporary placing of one of his sculptures (which belongs to Moralis’ gallerist Peggy Zoumboulakis), at its original source of inspiration – Aegina’s Old port.
Moralis’ love of Aegina is well-known. He built his holiday home/studio there in a neighborhood which boasts the houses of other important creative spirits (eg artists Christos Kapralos, Nikos Nikolaou, writer Nikos Kazantzakis, poet Odysseus Elytis). This elite intellectual group of the late ‘30s, bonded and exchanged ideas on Aegina, each one further inspiring the other on their creative course.
Moralis was born in Arta (1916), studied at the Athens School of Fine Arts under Umbertos Argyros and Konstantinos Parthenis, before continuing his art studies in Rome and Paris. However he decided to return to Greece when WW2 broke out. From 1947 to 1983 he taught at the Athens School of Fine Arts. In 1958 Moralis represented Greece at the Venice Biennale, together with artist Yannis Tsarouchis and sculptor Antonis Sochos. His relief design on the Athens Hilton, continues its dialogue with sculptor Kostas Varotsos’ giant glass ‘Runner’ situated opposite the hotel.
Moralis passed away in 2009, a year after his great retrospective show at the Goulandris Museum of Contemporary Art on Andros. It was there that I had the honor of meeting this wonderful artist in person, and to witness for myself his incredible modesty and quiet nature, proving that less is more, and silence has just as much meaning as words, when you have incredible presence. I could not help but think how despite his evident modern spirit, Moralis’ face resembled those of saints in Byzantine icons, especially in the years of his gaunter youth.
In his work, Moralis managed to marry elements of ancient Greek art and culture, with the simple, essential aesthetics of abstract art. Kyriakos Koutsomallis (Director of the Goulandris Museum of Contemporary Art on Andros), described him in his catalogue essay for the show of 2008 with the following words: “His painting is a universe of his own making, a world of abstract starkness, smooth colours and clarity of rhythm, dominated by the female figure, not as superficial visual device but as an intimation of the search for the essential and the real, for an inner mental and emotional being.”
Indeed, at the centre of Moralis’ work, is woman… camouflaged by modernism’s cool and ordered abstraction. If you look closely, you can decipher her female curves in most of his paintings, or even poses of men and women intertwined – and more, in terms of eroticism. But it’s all done very subtly. At first glance, you only see the perfectly composed picture, its curves and lines in perfect harmony. His colour combinations – simply immaculate. But behind the calm reserve and the aesthetic preoccupations, there is primordial passion – and a Greek temperament veiled in abstract clothing. He is undoubtedly one of the greatest Greek modern masters.
For 45 years, Moralis was represented by the Zoumboulakis gallery. His relationship with its owner Peggy Zoumboulakis was more than just business – they were more than friends even, more like family. So much so, that as Peggy mentioned in an interview of 2010 published in ‘To Vima’, he also entrusted her with his 200 taped interviews, in which she claims, that he says it all. It would be lovely to see this material published in a book one day, maybe even in English, so that Moralis’ genius can speak to more people. Peggy also said the following about Moralis, in the aforementioned interview:
“He ate frugally, he was a simple man, and money or fame didn’t affect him. He charmed women and he loved them essentially. After all, his whole oeuvre was erotic. He would fall in love with them, he would look after them, but he also deeply respected every woman who didn’t have a relationship with him. His whole work is an ode to womankind and to love. His great love was his son Konstantinos. He talks often about him in his interviews which he entrusted to me and my children.”
I hope Aegina’s planned events, and my own little ode to this great artist, has given readers enough of a reason to visit the island at the end of the summer. Not only will you get the chance to see the work of one of Greece’s greatest modern artists, but also (on a simpler note), it’s an opportunity to stock up on some pistachios: the Moralis events are part of this year’s Fistiki (Pistachio) Festival , which runs 15-18 September. A visit to Aegina can also be an ideal day trip, seeing as it is so close to Piraeus.

(Below clockwise: examples of Moralis’ work, photographs of the artist with Peggy Zoumboulakis, and at a show opening, plus a self-portrait) 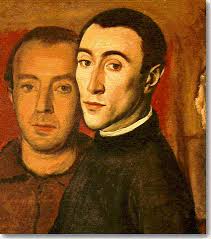