Greek seascapes in focus
The Greek sea has inspired many a Greek painter, and the Theocharakis Foundation’s new show, which will be inaugurated on February 15, pays homage to the many Greek artists who have created outstanding seascapes over the years. The exhibition comprises works from two most important collections – the National Gallery of Greece’s and the Koutlides Foundation’s. From the great seascape masters of the 19th century (eg Volanakis, Altamouras), to the works of early modernism (Maleas, Lytras, Parthenis, Economou), to the ‘30s generation (Hadjikyriakos-Ghika, Steris, Asteriadis) and many more (Tsingos, Prekas, Gaitis, Tetsis, Kokkinidis, Tsoclis, Theocharakis, Filopoulou), this is a show that will thrill all ages, as does the Greek sea.
• Runs Feb 13-May 7 at the Theocharakis Foundation (9 Vas Sophias Ave, tel 210-3611206). Open Mon, Tues, Wed, Fri, Sat, Sun, 10-6. Thurs 10-8. 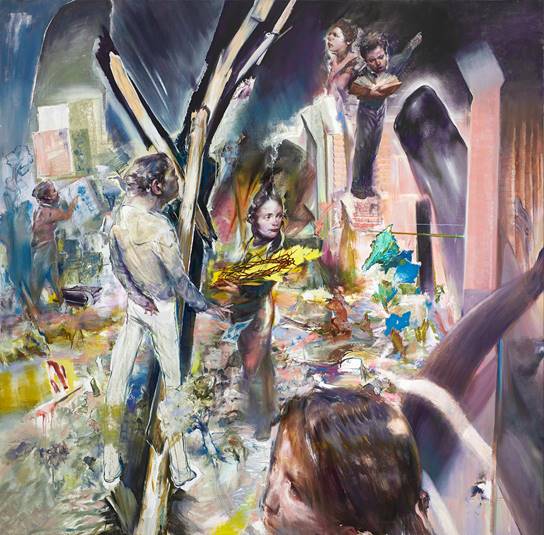 Missouras’ ‘Fluid Frames’
The Evripides Gallery is hosting a show of works by Tassos Missouras, which present this artist’s incredible versatility in terms of both creating scenes of an allegorical and symbolic nature, but also his ability to create intriguing fictional characters, which he has described as mixes of different people. Spooky reality and surreal fiction thus intertwine in his work to create thought-provoking but also emotionally-loaded scenes.
• Runs till February 18 at the Evripides Gallery, Kolonaki (cnr of 10 Herakleitou and Skoufa sts, tel 210-361-5909). Open Tues, Thurs, Fri 11-8.30, Wed & Sat 11-5. Closed Sun and Mon.

House of Dolls
Artist Katerina Zacharopoulou, also the host of the art show ‘I epohi ton eikonon’ (The age of images), is presenting an art project of hers inspired by Petronella Oortman’s doll house (created between 1686-1710, on show at Amsterdam’s Rijksmuseum), at the Benaki Pireos Museum. The project is a production of Thessaloniki’s State Museum of Contemporary Art and consists of 10 video projections that focus on a woman’s everyday life, and which take place in a fabricated domestic environment. This exhibition is complemented by another installation by Zacharopoulou at the Onassis Cultural Centre, entitled ‘The Table of Narrations’, which runs till February 24 and involves interactive play with the public and with a doll house. Both projects explore the idea of the house and all it symbolises and signifies. Curated by Syrago Tsiara.
• Runs till March 12 at the Benaki Pireos (138 Pireos St, tel 210-345-3111). Open Thurs, Sun 10-6, Fri, Sat 10-10. Closed Mon, Tues, Wed. Tickets at 7 and 3.5 euros.

Black and White Geros
After 20 years, artist Dimitris Geros returns to Athens, and is exhibiting at the Skoufa Gallery. The show will then travel to Thessaloniki, Nicosia and New York. His new black-and-white works (plus a few red ones) have been inspired by 18th century sillouette drawings but also ancient Greek vase painting of the 7th century BC. All the works have been created in 2016, and show a new side to his oeuvre, very different to his usual polychromatic paintings, although some of his figures and symbols do reappear here too. Many of these works comment on the refugee crisis of recent years, which Geros has witnessed up close, seeing as he spends a lot of time on Lesvos. And so, you can find in these works ape-like people, which symbolise the new ‘political animals’, refugees fighting with the waves, but also a little Chinese man, taking videos of them (Ai Wei Wei).
• Runs till Feb 18, at the Skoufa Gallery (4 Skoufa St, tel 210-364-3025). Open Mon, Wed, Sat 10—3.30, Tues, Thurs, Fri 10-3.30 and 5.30-9.

Byzantine with a real twist
Antonis Kosmadakis is an artist who proves that there’s more to Byzantine art than you think. Taking it out of its traditional religious context, and giving it a more realistic twist, this form of painting becomes a most intriguing and versatile means of expression. His show ‘Illumination’, is both a critical glance on society but also reflects the artist’s belief that the act of painting is indeed a spiritual matter.
• Runs till Feb 25 at the ena gallery (Valaoritou 9c, Kolonaki, tel 210-3388501).

One thought on “Five for February”