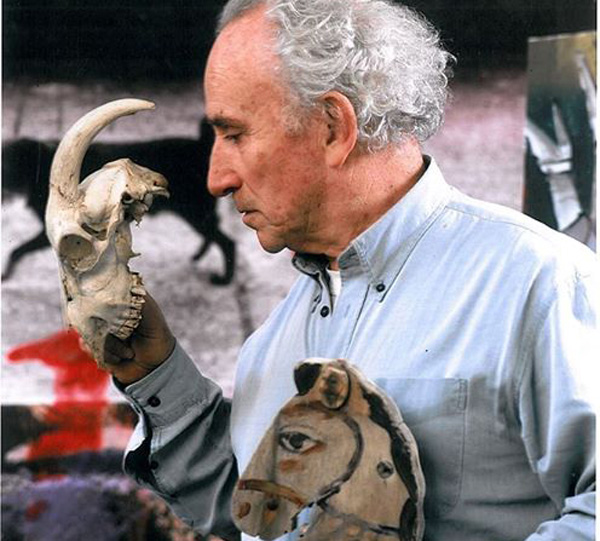 DIMITRIS MYTARAS passed away on Thursday, February 17, at the age of 83. He was one of the greatest contemporary Greek painters. When engrossed in the act of painting, he would use even his fingers to create his characteristic black marks and lines. His works took both from ancient Greek history and mythology, but also from Greek contemporary culture and reality. Mytaras started teaching at the Athens School of Fine Art in 1975, and served as its Dean  from 1982 to 1985. He was a beloved teacher and mentor. In Halkida, he founded an art workshop in 1978, which his wife Harikleia managed, and which still is active to this day, helping to enrich the local artistic scene. He studied at the Athens School of Art under Yannis Moralis and Spyros Papaloukas, carrying on his studies later in Paris. His first solo exhibition was at the historic Zygos gallery (1961).
From his period of critical realism during the years of the Dictatorship in Greece, Mytaras moved on to a more expressionistic phase in his painting, one which he stuck to. He wasn’t afraid to dabble in the decorative and applied arts either, as well as in stage design. Mytaras had been awarded by the Athens Academy and the Municipality of Halkida, and had exhibited his work in many solo and group shows both here in Greece and abroad, including many biennales and also retrospective exhibitions. He had also painted the walls of the little seaside church of Panagia Katafygiotissa, near Palaia Fokia on the way towards Sounion (for free), interpreting religious subject-matter with his own style of painting.

My interview with Dimitris Mytaras which follows, was published in the ‘Athens News’, Wednesday, November 12, 1997, when he had exhibited his 40 paintings of shells from the Greek seas at the Astrolavos-Dexameni Gallery. The paintings were also included in a book (Kastaniotis publications), accompanied by a text by Karolos Vratits, and a CD with music inspired by the sea’s magical world (composed by Mytaras’ son Aristeidis Mytaras). I remember going to Mytaras’ house, and seeing his wonderful shell collection, which he kept in a room-turned-museum:

– You have a collection of thousands of shells and corals from around the world. What was your inspiration behind this collection?
– Shells, and the sea are part of my tradition. I originally started collecting them when I used to dive and go fishing, but then my interest in these life-forms went further. I became interested in their sculptural forms and their way of life. So I started buying them from special shops and foires around the world. The wonderful surprise when you come across these creatures in the sea is magical, or rather like coming across a hidden treasure.
– It’s a sort of discovery?
– Yes, it is. In fact I will never forget one occurrence when I was in Evia. I suddenly found a very rare shell on the rocks which the sea had washed up overnight. It was like a gift.
– The book which you have created along with Karolos Vratits, Aristeidis Mytaras is a synthesis of image, text and music. How did this come about?
– It happened slowly, after meeting with Vratits, who did the diving and the documentaries for which my son created the music. We have been working on the idea for three years and finally the Astrolavos-Dexameni was the place where it all came together.
– Is the message of the book and the exhibition ecological?
There are two main aims – one is to introduce the public to the wonders of the sea world, and through this introduction, we are also aiming to raise awareness around the issue of protecting and respecting this part of nature. Greece especially, is not taking enough measures to protect its sea life. In the Aegean for example there are many precious corals which are unprotected. Fish and shells are slowly becoming extinct from coastal areas and shores.
– Is there a symbolism inherent in them for you which goes beyond their formal beauty?
– Yes, it’s the love for nature and nature’s purity that I see in them as well as nature’s truthfulness. Shells are not just beautiful objects, they are works of art in themselves which have a life that has to fit into a certain environment. Architecturally speaking they remind me of the Ekatondapiliani monastery of Paros, which was built with many arches in order to be able to defend itself from the violent winds. Furthermore, this collection for me is also a means of escapism. 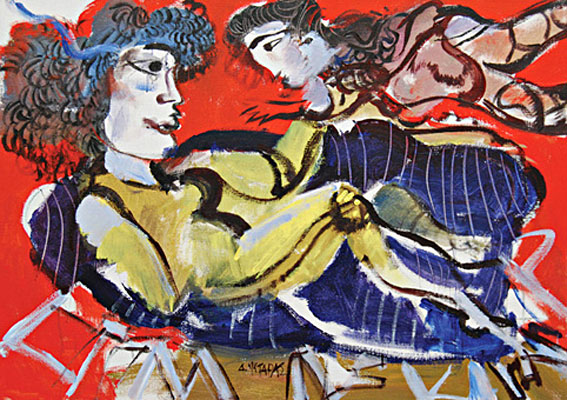 – You have explored many different themes in your work, ranging from motorbikes to ancient Greece. This is the first time you have painted shells. Is this a separate chapter in your work or is there something which unites all your chosen subjects?
– It is a separate theme in my work, but it is part of the same methodology. This new subject is something which I will probably not return to however, it was really explored in relation to the book. But I could say that my interest in shells has definitely influenced my previous work, in terms of colour and harmonies and forms. I often go to my collection in order to be creatively inspired.
– You have studied the element of violence in art and have even published a book on the subject. Is there violence in the marine world?
– Yes of course. Violence is part of nature’s means of survival. Shells can also be violent. Some shells drill holes in others and suck out their contents. There is a saying: ‘The big fish eats the little fish’. That describes this aspect of nature. In this work however I am more interested in the ecological message.
– What is your opinion about the international art scene?
–  It is like a big garden of flowers, each having their own roots, a flower cannot exist without its roots. The problem with Greek artists today is that they often neglect their roots and try to mimic trends which have grown out of other cultures instead of picking up on messages their own country transmits.
– What messages do you think that Greece can transmit to the artist?
– One which is especially appealing to me is the juxtaposition and synthesis of ancient and modern, traditional and contemporary. My present focus on the timeless and mysterious values of the sea world could also be another message I have picked up on. For Greece the sea is part of its mythology. The sea is part of Greece’s body, to ignore it would be like cutting off a limb.