‘Art Scene Athens’ speaks with artist Kostis Velonis at his exhibition opening, to get some feedback on his new installation project, commissioned by NEON Organisation, that explores the intriguing sociopolitical and personal history of a beautiful neoclassical home in the heart of Athens:

Partial view of one of the rooms, with works by Velonis. ©PanosKokkinias. Courtesy NEON and Kalfayan Galleries

EACH HOUSE has its story – a narrative about its many occupants – their beliefs, political and other, their relationships, history, loves and losses. The older the house, the more the stories. These days, it is the turn of the neoclassical house on Kaplanon 11, to tell its tale; Built in 1891, in the heart of Athens, with its walls of peeling paint – via the artwork of Kostis Velonis. Commissioned by the NEON organisation, Velonis undertook the task to explore the history and the people connected to the building and to channel his findings into his bricolage art works that now occupy this elegant, now derelict abode. This site-specific project has been curated by Vassilis Oikonomopoulos – assistant curator of the International Art Collections at the Tate Modern.
Kostis Velonis’ art installation at Kaplanon 11, entitled ‘A Puppet Sun’, is the 4th art intervention that has been undertaken by NEON’s City Project – an annual initiative of public art commissions in some of Athens’ most historical sites and spaces, which aims to activate these spaces through contemporary creative practices. Previous City Projects have been: Aimilia Papafilippou’s ‘Pulsating Fields’ in the Ancient Agora (2014), Maria Loizidou’s ‘Transfer’ of woven stainless-steel fibres, in Kerameikos (2015), and Zafos Xagoraris’ ‘The Performance’, in the car park behind the now derelict Athinaion Theatre (2016). 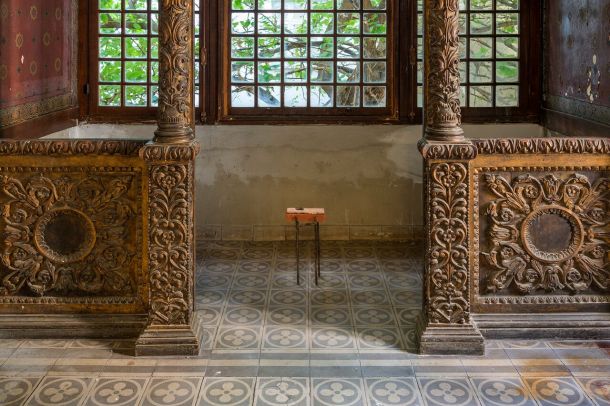 The building:
One look inside the premises of Kaplanon 11 certainly suggests its past life as a stately home, where Pavlos Kountouriotis once lived – a lieutenant of the Royal Hellenic Navy who went on to become the fleet’s Admiral, and who also held the office of President of the Hellenic Republic twice. Later in 1908, the building was bought by Panayiotis S. Zouzoulas – a landowner, merchant magnate and politician. It housed the family of his son Apostolos – founding member of the People’s Party (‘Laikon Komma’). Apostolos’ wife, Eleni Zouzoula-Kanellopoulos was a lady of culture, and the first female writer of children’s literature, plus an avid collector of Byzantine and Greek folk art.
The most impressive part of this building is the two interconnecting reception rooms known as the ‘Hellenic’ and the ‘Byzantine’ salons, which were Eleni Zouzoula-Kanellopoulos’ initiative. They were designed and executed by Aristotelis Zachos (architect), Angelos Koryzos (architectural engineer) and Yorgos Vlachos (woodcarver), with wall decorations painted by Dimitris Pelekasis and his young assistant Yiannis Tsarouchis (later to become one of Greece’s most famous modernist artists). Here, you feel like you are standing in a Byzantine church, rather than someone’s salon.
In 1939, the Metaxas Dictatorship created a Student House Foundation at Kaplanon 11, providing lodgings for financially underprivileged female students. The building was sold off during the Nazi Occupation, but in the early 1990s, it was bought back by descendants of the Zouzoulas family, who are now in the process of restoring it to its former glory.

Kostis Velonis (L), with curator Vassilis Oikonomopoulos, and the work ‘Turmoil of the Blue’. ©PanosKokkinias. Courtesy NEON and Kalfayan Galleries

The artist:
Velonis (born 1968), lives and works in Athens. He has been awarded degrees from London Consortium (Birckbeck College, ICA, AA), Universite Paris 8 (DEA), and a PhD from the National Technical University of Athens. He has exhibited his work in many prestigious museums etc abroad (in Stuttgart, Kassel, Antwerp, Mexico, Milano, Munich, London, Brussels, Melbourne), as well as at the National Museum of Contemporary Art (EMST), in Athens. But despite his growing reputation as one of Greece’s most important contemporary artists, Velonis hasn’t been tempted to leave Athens. “We artists always have this question in our head – whether it would be better to be abroad, but whatever town you’re in, you’re always wondering whether it would be better somewhere else”, he explains to ‘Art Scene Athens’, concluding that “everything is relative”.
‘Art Scene Athens’ caught up with Kostis Velonis, at the opening of the exhibition on October 11, in order to get some feedback about his 25 brand-new art works comprised in ‘A Puppet Sun’:
– It’s interesting how you tried to get under the skin of the people who used to live here. You have approached your subject (Kaplanon 11), from many sides – political, historical, but also personal – it’s a very wide spectrum.
– I wasn’t concerned with making any political judgment concerning the people who lived here because I’m not a historian.
– But your work is political
– Yes it is political, but politics for me start from within the house and the kind of relationships we have with the people in the house. I also tried to return to myself through these works and to capture the perspective of Eleni Zouzoula-Kanellopoulos who wrote children’s stories, which I also read.
– How are these stories?
– Well, for a start they reflect their epoch – that of the ‘20s and ‘30s. She shows a great amount of forgiveness in terms of how she understands human mistakes, she shows an attempt towards nurturing fraternal love, especially among children of different social classes. She had also created a union for this purpose, aimed at bringing various classes of children together. This shows that she is an altruistic person. However her children’s tales also had some surrealistic elements, for example in one story she writes about princesses and castles, but then Charlie Chaplin makes an entrance! It could be considered kind of contemporary or postmodern even. She also speaks of the sociopolitical aspects of Athens via her stories. And then there is the element of forgiveness, for those who stray from the path.
– But isn’t this also part and parcel of her Christian spirit?
– Yes, but she was also a person who read the writings of the socialist Platon Drakoulis. She also liked the Sophists, and this also shows in her writings. She was an interesting person. She started writing a lot between 1931-6, after her son had died and up till her own death.
– What do you see happening to these works after the show? Because they are very site-specific and connected to this building. Can they be exhibited elsewhere?
– I think in some cases yes, if not in all. Because they also have their autonomy. I’m very egotistical to accept that some works exist only in a very specific architectural background. I would prefer them to have their autonomy in relation to the building.
– You have exhibited your work internationally in prestigious museums etc, as well as in Athens. You were also part of the ‘Antidoron’ show of Greek art from the EMST collection presented at Kassel’s Fridericianum (part of documenta 14). How do you think contemporary Greek art compares to what’s happening internationally?
– It can compete with the rest. I don’t see it as better or worse, and it’s definitely as interesting.

‘I See the Sign’. ©PanosKokkinias. Courtesy NEON and Kalfayan Galleries

The art:
It’s the contrast between the minimal nature of Velonis’ art and the remnants of the building’s grandiose past that create an intriguing dynamism at Kaplanon 11, like two opposite poles that attract. Concrete, metal, wood and found objects are organised by the artist into constructions which reflect aspects of the building’s history and residents, often playing with the scale of things by complementing large works with teeny ones. Velonis is capable of charging the simplest of forms with magnanimous meanings. For example: A blue garment hanging from a large spiralling piece of iron in the work ‘Turmoil of the Blue’, reflects the turbulent geopolitical relationships between Greece and its neighbouring countries, but also relates to the production of historical meaning and national identity. 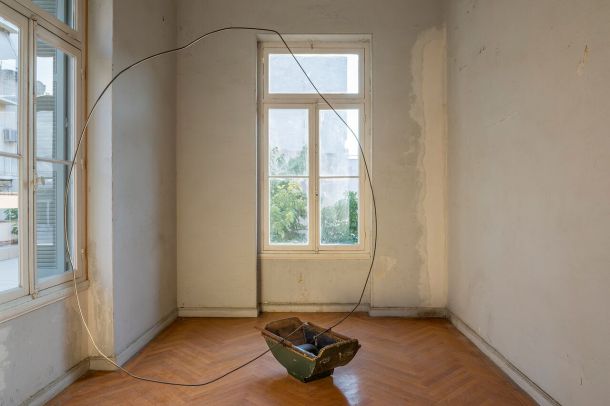 The political activity that has taken place in the house is reflected in some of the works, while Christian ideology with a twist, takes centre stage in the work ‘I See the Sign’, where a large wooden cross on top of the chiselled marble fireplace, also resembles a hydroplane. Down in the basement, the sculptural forms suggest rebellious and anarchic undercurrents that could threaten the status quo upstairs.
Among the works on the 1st floor, you will find ‘Hold Me Tight’, a work in which an old children’s swing is surrounded by a broken metal circle. Here, things get personal as Velonis focuses upon the relationship that Eleni Zouzoula-Kanellopoulos had with her son. They were very close, and his unexpected passing away influenced her life and work. It was after his death, that she began to write incessantly – novels, religious poetry and children’s stories. Maybe for Velonis, this reflected one of his own beliefs about art, which he had expressed in an interview in ‘lifo’ (www.lifo.gr): “Art is necessary so that we can come to terms with death and that anxiety which goes beyond periods of great crisis or stays in earthly paradises”.

On the 2nd floor, the work ‘A Puppet Sun’, from which this whole installation project gets its name, stands on the floor, resembling a peculiar old children’s toy. The Apollonian sun of reason, of knowledge and enlightenment, has been reduced to a humble plaything. Maybe that’s what ideologies are at the end of the day – a puppet on a string, manipulated by others. In Greece at least, we have often seen this to be the case. In another room, in the work ‘Days Left’, the scratches on the wooden construction that resembles a piece of furniture, mark the days that have been spent here: Velonis isn’t referring to prisoners, but to the female students who used to live here during the Metaxas regime.
“You know, this area was once full of houses such as this one. They all had an outdoor space/yard, with their orange and lemon trees”, explained an elderly lady to someone at the exhibition. When visiting such places, one certainly is tempted to envision what life must have been like in Athens before the concrete took over. Kaplanon 11 certainly provides us with a glimpse, but counterbalanced with Velonis’ artistic interrogation which brings to the fore many more machinations of those times; thus providing us with a postmodern perspective on that awe-inspiring glam of past epochs.