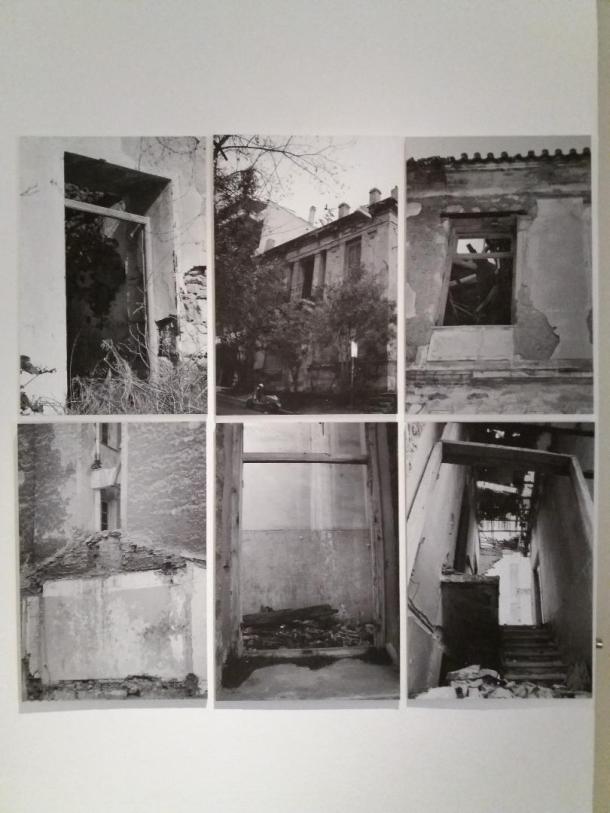 ‘Art Scene Athens’ talks to artist Lila Papoula about her exhibition ‘Walls that were hiding our faces’, at the Evripides Gallery, which runs till December 9:

IN THE EIGHTIES, artist Lila Papoula searched the streets for derelict walls, which she photographed. She was drawn to these remaining fragments of people’s lives, not only because of their symbolic worth, but because she too had been ‘born and raised in such a ‘house’, that no longer exists’. There are many such derelict walls/houses/buildings to be found in Athens and beyond, and on an aesthetic level, there is beauty in their decadence – they are like abstract paintings, full of different textures, tones, compositions, waiting to be discovered. And rediscovered, via painting, a few decades later, which is what Papoula did, at the beginning of the crisis, in 2010: the artist dug up those photographs, and transformed them into paintings of all sizes (from the monumental to the small square). Each painting tells a lyrical tale, of loss and hope:

– Tell us how this painting series all started.
– I had taken many photos in the Eighties of walls, which suddenly inspired me to create these paintings, many years later. There are two units of paintings here: the first is under the title ‘What has remained’, and the second is inspired by the poem by Manolis Anagnostakis, entitled ‘There’. Basically it was the whole atmosphere of the crisis, which led me to remember these photographs, and to also create a video, which explores the places I had photographed. After this ‘documentation’ process, came the painting process. It’s not a chance occurrence that I returned to these photographs of walls after so many years, when the crisis began, although the concept of the wall has always existed in my work. 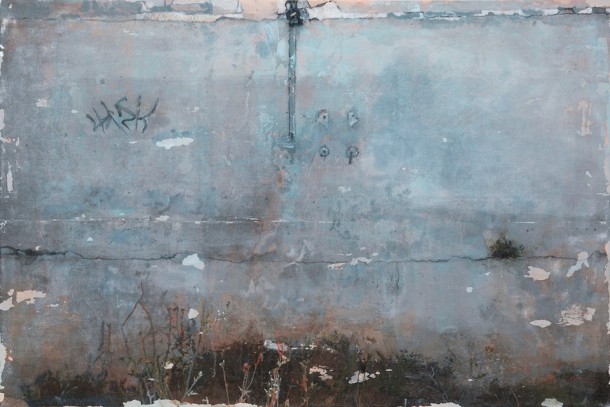 – What do walls signify for you?
– The wall is something upon which history is written. That appeals to me, but my work is also experiential, and so the rich texture which a wall possesses, also appeals to me, because it can become a medium via which I can narrate my stories, which are personal, but at the same time aren’t.

– What drew you to Anagnostakis’ poetry?
– He is a poet who speaks a lot about loss. And because I, as well as everyone else, have been affected by the general atmosphere that surrounds us today (of the crisis), they became increasingly relevant. But I’m not just talking about the economic and political crisis, but also the crisis of human relationships. The crisis has made us ponder upon our relationships too: what we had, what we lost, and what we have now. The past became our support system, in order for us to face our new present condition.

– The techniques and artistic process you use in these works is fascinating.
– These are mixed media works, which comprise of acrylics, inks, pastels (water-soluble). There are also traces of paper to be found on the picture-plane, because I stick and unstick paper onto the canvas, and sometimes a bit might remain there, which can become part of the composition if I feel it adds to it. I also use many varnishes and lots of lazure (a painting technique which involves applying many transparent layers of paint). After my initial intervention on the canvas, comes a second, and then more procedures of layering and unlayering – adding and subtracting.

– It’s a very interesting technique because via this adding and removing process you are essentially building the work.
– Yes, and this adding and removing process also connects with my thinking process, my pondering on what is and what isn’t. I want the work’s matter to take part in the painting’s narrative too. But these are also the stories of walls, of ruins, of what has remained from someone’s life where that derelict wall now stands, for example. And that’s what interested me initially.

– How would you characterise the mood of these works?
– It is a mood of optimism and nostalgia, because what interests me is what happens from now on. How we can survive under the new regime of things, by building on the certainties that we had, and lost.
– Some works are abstract, while others show attention to detail in certain areas of the composition – plants, graffiti etc.
– Basically the work guides me towards the end result. Sometimes I have the need to describe something more in the composition, and other times I don’t feel I have to; so it becomes more abstract. But there is always a narrative of sorts. I thus discover the work, along the path of my artistic process.

A brief bio:
Lila Papoula has studied art at the Athens School of Fine Arts, whilst also having taken lessons at London’s St Martin’s School of Art. She has taught art and has realised over 20 solo shows of her work, and taken part in many more group exhibitions.