HERE’S a ‘petit’ potpourri for February, which presents the diverse range of art on show in Athens at the moment: from historic naval battles to contemporary bearded provocation. There are many more quality exhibitions around town of course worth seeing, so I’ve also added another five shows in pictures at the end, for your perusal. So enjoy!

Volanakis’ spectacular seascapes
Let’s start with the grand master, whose ships and seas are unrivalled to this day – Konstantinos Volanakis. The exhibition of his work at the Theocharakis Foundation, will be inaugurated on Wednesday, February 7, and is entitled ‘Konstantinos Volanakis: The Father of the Greek Seascape’. It is a good place to start if you want to see some traditional painting at its best. Volanakis was one of the most important representatives of the famous Munich School, who chose however to steer clear of the school’s preferred genres of ethical themes and portraiture, and instead to delve deep into his own preferred subject-matter – the sea – not failing however to often give it historical context in the process: The immaculately painted historical scenes you will come across, include ‘The Burning of the Turkish Frigate at Eressos’ (1882, from the Panos Laskarides Collection), ‘The Naval Battle of Navarino according to Garneray’ (from the Maritime Museum), the ‘Naval Battle of Salamina’ (1882, from the archives of the Navy), ‘The Arrival of Princess Sophia at Faliro’, (1889-1890, from the Evangelos Angelakos collection), and many more. This exhibition has gathered works by Volanakis from many prestigious collections, and is indeed a spectacular vista of this master’s work.
Volanakis was born in Herakleion, Crete, on March 17, 1837. He studied at the Greek School of Ermoupolis in Syros and took his first painting lessons in the studio of painter Andreas Kriezis. He then travelled to Trieste. At the age of 27, he enrolled at the Royal Academy of Arts in Munich, where he studied under Karl von Piloty. His important artistic career is studded with many successes and awards. He took part in a competition organised by the Austrian government in 1866, with the work ‘The Naval Battle at Lissa’. The painting was presented in 1868 in an art show in Vienna, where it was bought by the Emperor Francisco Jose. He also took part in the exhibitions of the Artistic Society of Munich. In 1877, he showed his work ‘The Naval Battle of Trafalgar’, in London, and it was bought by the Navy Ministry of England. In 1883 he returned to Greece and was appointed professor at the Athens School of Fine Arts, whilst also teaching at the Artistic Centre, which he had founded in 1895 in Piraeus. Volanakis gained the silver award at the International Show of Athens, in 1903, and the Silver Cross of the Saviour in 1889. He passed away in Piraeus in 1907.

Theorimata
The National Museum of Contemporary Art (EMST), together with the Greek branch of the International Union of Art Critics (AICA Hellas), have organized the exhibition ‘Theorimata’, which opens its doors to the public on February 8, 7pm (and runs till April 15). Here, you will find the marriage between art and theory, realized via a show which brings together a group of art theoreticians, each one of whom have proposed a particular Greek artist (or artists). The aim of the exhibition is to present the pulse of Greek art today, via a dialogue between artists, art historians/critics/theoreticians. This exhibition will become a regular meeting point between artists and AICA Hellas at EMST, to be realized on a biennial basis, and with a different slant/axis each time. This year, the topic under exploration is ‘Deductive and Axiomatic Systems’, in the belief that an artistic creation is the product of an analytical process and not just an expression of current dominant models.
At the exhibition ‘Theorimata’, you will get a chance to experience the ‘crème de la crème’ of both Greek avant-garde artistic productivity, and Greek art theory. It will be a contemporary intellectual and artistic dialogue which brings together the Greek pioneering heavyweights of both fields (art and theory), under one roof. The works of over 40 artists are comprised in the show, which have been chosen by 18 art theoreticians. Emmanuel Mavrommatis (President of AICA – Ηellas and Emeritus professor of the Aristotle University of Thessaloniki) is the mastermind behind this exhibition (in terms of concept and coordination), plus artists Dimitris Alithinos, Theodoros, Marios Spiliopoulos, and George Ηarvalias have been honorarily proposed by the organizational committee. The organisational committee comprises of the members of the board of AICA – Hellas Stamatis Schizakis, Artemis Potamianou, Faye Tzanetoulakou and Sozita Goudouna and the members of the association Bia Papadopoulou and Lina Tsikouta.

Gilbert & George: The bad boys are back

THE BRITISH dastardly art duo that have made Athens one of their favourite exhibiting grounds, strike again, with yet another crazy show full of colour and drama. Their new work on show at the BernierEliades Gallery is entitled ‘The Beard Pictures’, and runs till March 6. Here, you will find what Michael Bracewell has described as “a dream-like world of paranoia, destruction and madness”, which in a sense reflects our current reality. Bracewell elaborates: “Their strange sickly colours and creeping, smashed up, absurd landscapes confront the viewer with relentless aggression. [….] Gilbert & George take their places within these works, as intense, red, staring, empty-headed and sinister versions of themselves. Their eyes are shadowed and bizarrely prettified. Mutant impish explorers or dead-headed sentinels, they seem to look at, into and through the viewer. […] They wear beards that are surreal and symbolic. Beards made of wire mesh, beards made of beer foam, beards made of flowers, beards comprising rabbits with snakes for tongues. Secular and sacred, the throwback emblem of hip millennial youth as well as a mark of religious faith, the beard is depicted in THE BEARD PICTURES as both mask and meaning: a sign of the times.”
* Bernier/Eliades is on 11 Eptachalkou St, Psyrri . Tel: 210-341-3937. Open Tues-Fri 10.30am-6.30pm; Sat noon-4pm.

The contemporary sculptural master Yiorgos Houliaras is exhibiting his new creations at the Evripides Gallery, till February 24. Comprising of a series of large metal works, which refer to images and feelings which reflect upon our times, plus a group of smaller works which focus on the human figure, this sculptural unity was begun in the ’90s. However, in order to complete these works, the sculptor had to return to his studio after his stint as a professor at the Athens School of Fine Arts  (ASFA), which meant that they were completed in the last 4 years.
This new body of work is characterised by a different use of his materials, seeing as Houliaras has incorporated remaining fragments from previous works. He says of this process: “although it seems strange, this was one of the elements that moulded the sculptural image of my current work, which is characterized by diagonal, linear (and not only) rendering and development of the composition, of transparency and permeability and of an attempt towards the sculptural rendering of the senses”.
• The Evripides Art Gallery is on the cnr of 10 Herakleitou & Skoufa sts, Kolonaki. Tel: 210-361-5249. http://www.evripides-art.gr. Open Tues, Thurs, Fri 11am-8.30pm. Wed 11am-5pm, Sat 11am-4pm. 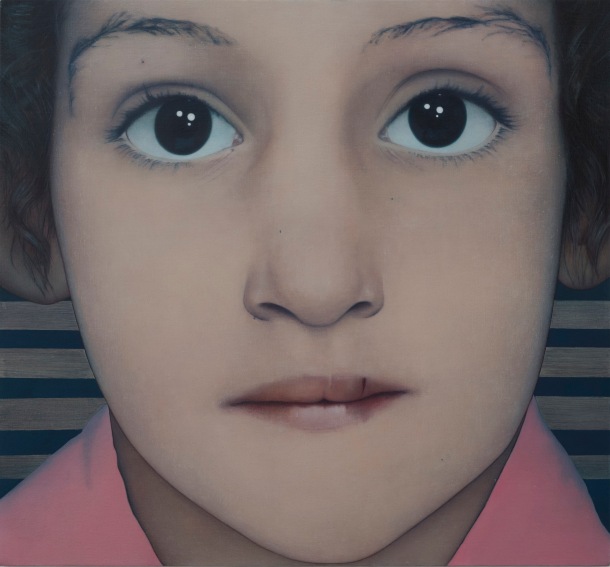 Bonding painting and digital mediums
Maria Polyzoidou’s works are on show at the AD gallery till March 3. Her paintings adhere to the tradition of realism, however, she also uses forms of digital image production, something which helps her render a flawless chromatic saturation of the canvas – without the slightest expressive gesture. Polyzoidou draws from her archive of personal images as well as from the vast stock of images circulating on the web. Whereas intimate pictures are dissociated from the person and claim public visibility, anonymously produced and generally accessible images are given unique meaning. Polyzoidou’s painting makes reference to the spheres of the private and the public, the virtual and the corporal – every painting is a union of an unstable and destabilizing interface between the various realms. 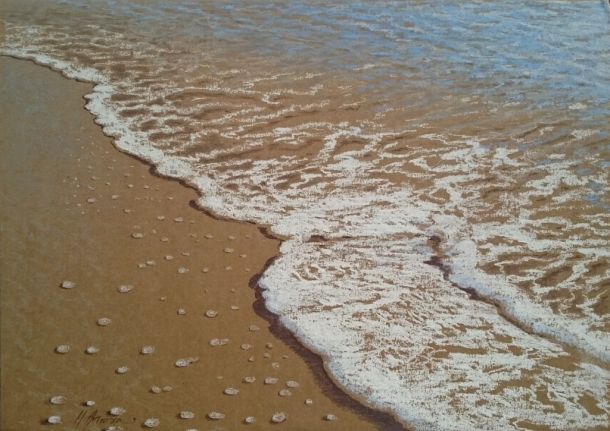 Sea foam captured
And seeing as I kicked off with the sea, allow me to end with it too, because the sea is something that has been a central theme in Greek art from the beginning of this country’s ancient artistic tradition. It is interesting therefore to follow how this theme has been developed in contemporary painting today. One such example is the work of Marietta Antiohou, to be presented in the show entitled ‘Waves of Sea’, which will be inaugurated at the Argo Gallery, on February 13, 7pm (and runs till March 10).

Art Historian Dora Iliopoulou-Rogan speaks of the duality and the poetry “which springs from the artistic compositions (watercolours, mixed media and drawing) of Marietta Antiohou.” Indeed her works are poetic depictions which capture that duality between fluidity and stability – the sea and the sand as they meet and ‘converse’.

Antiohou was born in Athens, and studied at ASFA, under P. Tetsis. She lives and works in Athens. She has realised solo exhibitions and has participated in many group shows.

And here’s another five (in pictures): 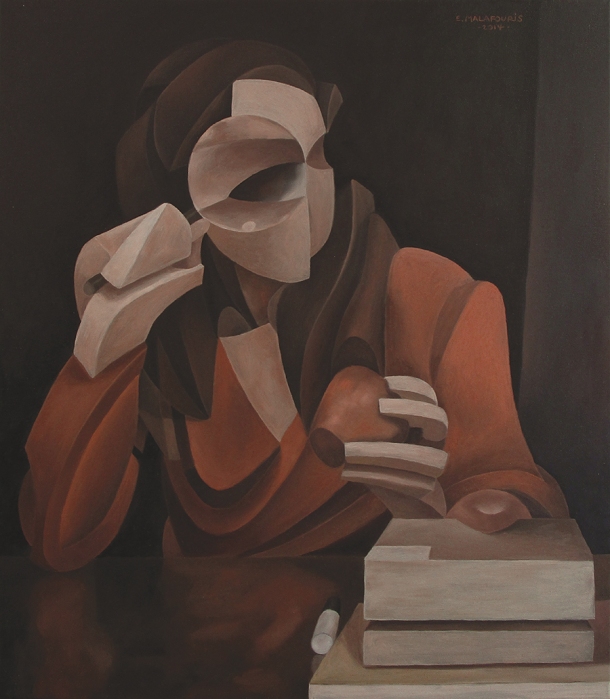 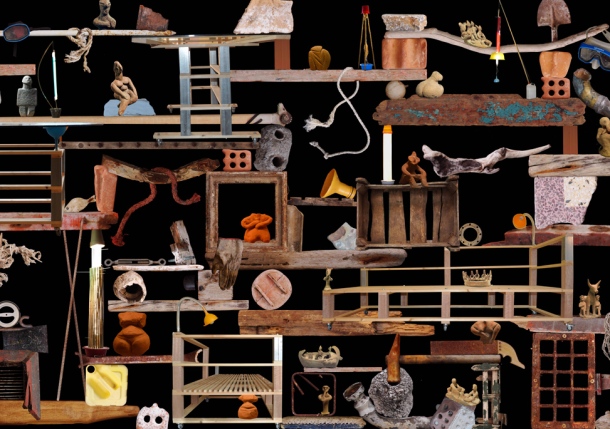 Group exhibition entitled ‘The Other Painting’, at the Sotiris Felios Collection (till February 11)