Stella Sevastopoulos celebrates Mother’s Day with a homage to mother artists, their trials and tribulations, in the history of art and in modern-day Greece:

The truth is that most women artists have had a pretty tough time trying to penetrate the glass ceilings of the art world in general – a chauvinistic, male-dominated profession up till recent history. And God forbid if you want to become a mother too! I have heard the same story from various women artists, who as art students, were considered inferior to their male counterparts by their teachers, because it was considered the norm for women to give up on art when they have children. Certainly it’s a tough profession, and the art world has preferred to invest in men artists, but the times they are changing… So on Mother’s Day, let’s hear it for those mothers out there, who are also artists.

‘Playing with the Reflection’, 1997, by Chryssa Verghi

Motherhood has its trials and tribulations for an artist, but much can be gained too. For example, in the case of Chryssa Verghi, it was her own son that lead her to her favourite subject of water and its reflections, something which she has been exploring since the Nineties. Her recent solo show at the Evripides Gallery (which ran till May 11), was an oasis in the heart of Athens’ concrete jungle. In a talk at the gallery, Chryssa explained that she would take her son with her on her painting expeditions in nature, by the sea, and he would play and swim while she painted. She often incorporated him into her works, and in one work in particular, where he dips his hand into a puddle, Chryssa became aware of the reflective surface of the water there. And this was the subject that she explored artistically from then. “Raising a kid as an artist is a process that matures you, develops you both as a person and an artist. Motherhood offers so much, helping you develop in ways you never expected. Creating art and having/raising a child are both creative processes that take whole chunks out of your being. As an artist and mother, when my son was young, I was always feeling torn between the two roles, because both needed my undivided attention. It’s a lot of work! But any highly competitive profession for a woman is like that”, explains Chryssa. 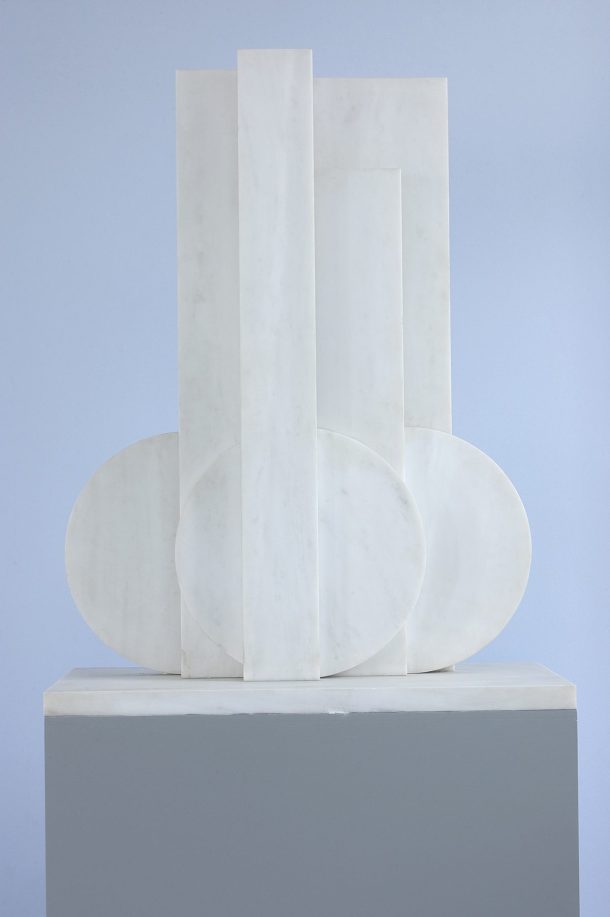 But then there is also the side of the artist’s child to consider. Back in 2017 in an interview for ‘Athens Insider’, I had spoken to artist Eleni Mylonas, child of artist Alex Mylonas, and had asked her what it was like to be the child of this famous Greek artist, to which she had replied: “My mother was an extraordinary woman. A pioneer, a trailblazer, courageous, intelligent, single-minded, independent, self-assured, a wonderful artist. But you did not want to mess with her. This made for a difficult childhood. There was not much mothering. Luckily I got the message early and stayed out of her way. I was her second child so I had the advantage of learning, via my sister, what NOT to do.” Undoubtedly it’s also tough being the child of an artist, or for any child for that matter whose mother is also dedicated to her profession.

Being an artist, is a full-time job, which isn’t just about creating art, but also about selling it. This entails making connections – something time-consuming, especially in the past, before the internet. But nowadays (especially due to social media), artists have been able to cut a few corners, with the internet allowing them to make contacts from the comfort of their own home. Selling art online has also been a real help for many artists, especially those mother artists out there. One such artist is Marina Syntelis, mother of two, who juggles her role as mother, and painter of dynamic waves and seas. For her, the internet and the Saatchiart site in particular (where she was a featured artist), have enabled her to carry out her dual role of artist/mother. Her art has even caught the eye of a Parisian gallery lately, something that would not have happened pre-internet. “In the world of art, there is less belief in women’s artistic engagement, than there is in men’s. But creating art is a necessity for an artist, whether male or female, and motherhood can actually enrich the artistic process rather than be an obstacle in its way”, explains Syntelis.

Some art mothers of art history

The further back in history you go, the harder it is to find women artists, let alone mother artists. But recently, I came across one who had 10 kids (yes 10), but was making such a thriving business out of her flower paintings, that she could pay for childcare so that she could paint. Her name was Rachel Ruysch (1664-1750), and she took the flower painting tradition of Holland to new heights and popularity during her lifetime. 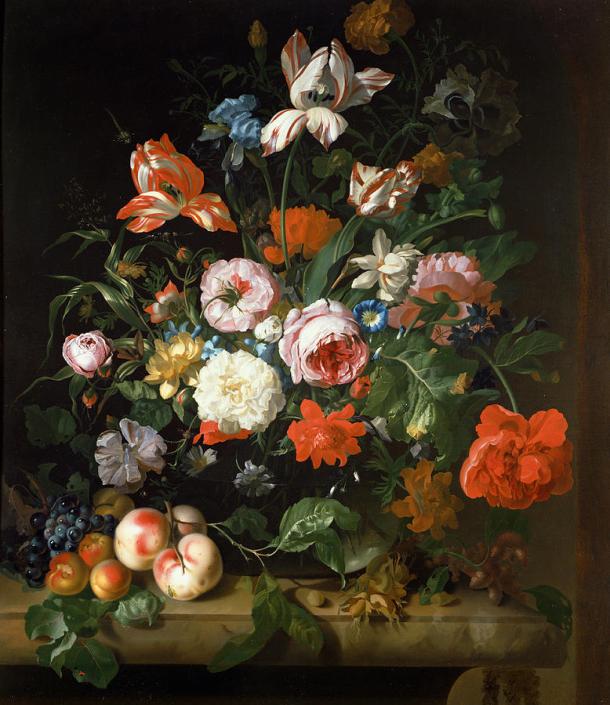 Other ‘famous’ art mothers that come to mind are Barbara Hepworth who had a son with the sculptor John Skeaping in 1929. The death of her son in 1953 in a plane crash affected Hepworth severely. Her sculpture ‘Madonna and Child’ in the Parish of St Ives, is a memorial work dedicated to him. Interestingly enough, Hepworth travelled to Greece and to the Aegean islands after this sad event, and found new inspiration there in order to continue her creative journey. Hepworth also had triplets, with the artist Ben Nicholson. They married in 1938 and divorced in 1951. The hospitalization of her daughter in 1944 lead Hepworth to explore the connections between surgeons and artists, resulting in a series of works. 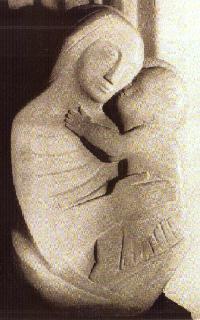 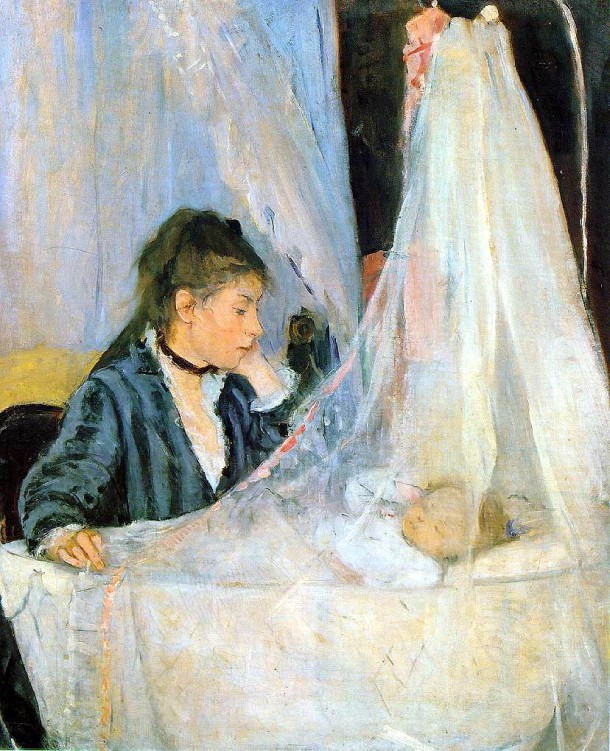 Let me also mention the Impressionist Berthe Morrisot, who gave birth to her daughter in 1878. Julie, her daughter may be found in many of her artworks, but also in those of other Impressionists. Then there’s concept artist Mary Kelley, hailed as the ‘Godmother of conceptual art’ on the site of ‘Vice’. In in an interview there, she explains why she created the work ‘Post-Partum Document’ – a six-year exploration of the relationship between mother and child, in which she even incorporated her baby’s defecated nappies: “I didn’t set out to shock. It was formed in the moment of conceptualism. My models were [the pioneering English conceptual art group] Art and Language. I was carrying out an interrogation. I wanted to deal with the stuff of life; which I felt they weren’t doing. I wanted to engage people emotionally and intellectually at the same time.”

The art world might have been male-dominated and chauvinistic for centuries, but recent history is painting a different picture, especially after Kelly’s feminist focus. Women artists are finally gaining ground these days. Maybe it’s about time that they are also allowed to be mothers, without this considered to be an obstacle in their career, or leading them to the decision to not have kids, so that they can stay dedicated to their art (as Marina Abramovic did, and has discussed). So let’s hear it today for those artists who dared to be mothers too.
• I would be interested to hear your opinions on this subject and the experiences of other mother artists, so please post something if you like.