Stella Sevastopoulos catches up with Kate Horti, a sculptor with an ecological conscience who enjoys transforming the industrial form of the bicycle into animals and insects (among other subject-matter), giving it a new lease of life.

THE BICYCLE was originally invented in 1839 by the Scottish blacksmith Kirkpatrick Macmillan. Since then it has become one of the most popular forms of transport across the globe, and has witnessed a surge of popularity over the past decades due to its environmentally-friendly character, coupled also by the fact that it is a great form of exercise. More city centres around the world are making way for bicycle lanes (and the municipality of Athens is no exception, having recently announced its latest plans to add one on Panepistimiou Avenue), so it looks like this traditional means of transport is here to stay.
But what about in the art world? How has the bicycle impacted that sphere? Let’s just mention the father of concept art, Marcel Duchamp, who in 1913 fastened a bicycle wheel to a stool, and so carved a niche for the ‘ready-made’ in the history of art. Nowadays, Greek artist Kate Horti seems to have been inspired by such artistic bicycle antics, only she prefers to transform this means of transport into animals and insects, athletic activities, or even into zodiac signs, rather than conceptual art conundrums. Her aim is interactive, but also ecological:

– Tell us a bit about the artistic course that you have followed and how you decided to choose the bicycle as the material from which you create your works.
– After having completed courses at the Perantinos Sculpture Workshop, where I was taught by the memorable Evdokia Papouli-Dimitropoulou, I thought that the material that really interested me was metal, and especially the ‘ready-made’ forms of the bicycle. And so, using a friend’s old abandoned bicycle, I created my first work from it, called ‘Life-Bicycle’.

– There is also an environmental side to your work, and you are very happy for people to drop off their old unused bicycles on your doorstep, so that you can recycle them into art. Tell us a bit about that.
-Yes, of course there is an environmental side to my work. I have been involved in recycling and the reuse of materials since 2009. I’m a fanatic recycler. So, from that point of view I believe that a bicycle can’t be destroyed, but can have a second ‘life’ as a work of art. But I believe that the whole concept of the bicycle is a work of art in any case!

– What role has art played in your life?
– Art is a way for us to breathe. I can’t think of anything that doesn’t have an artistic concept inherent in it. From a child I would create things, from embroidery (a folk art tradition), to knitting and painting. For me, everything is art… even the way you dress.
– You are also a journalist, how do these two sides of your life coexist (the artistic/journalistic)?
– Journalism is how I make ends meet. I wouldn’t be able to do that just with art. But in any case, I didn’t get so heavily involved in art from a young age, because I saw it more as a hobby at first. When I decided to go to the Perantinos workshop (2007), I delved deeper into the artistic practice, and due to being out of work at that time, I had the time to really dedicate myself to art.
– You also have a soft spot for Lefkada, having realized summer shows there. Has this island also been an inspiration in your work?
– Lefkada is where my family come from. It is where my roots are (I wasn’t born there, nor did I ever live). I always go there as a tourist, but it is a place that has a positive impact on my feelings and creativity. Maybe it’s the nature (the many olive groves), the Ionian sea, the constant windy atmosphere… It is a unique place and it is surely in my DNA… That’s where I first decided to exhibit my works, at the Ivarius reef off the town of Lefkada.

– You have the ability to see in the industrial form of a bicycle, other forms, such as the natural form of an insect (such as a fly, or a ladybird to mention but two). How would you describe your artistic process, and how do you decide on the subject-matter of your sculptures?
– When I see a bicycle, my aim is to then figure out how I can transform it into something living. For example, the seat of a bicycle resembles a bird’s beak, and the bicycle’s skeleton can then be transformed into its body. Although I have created many animals from bicycles, I think that their transformation into birds is the most apt, because it works on a realistic and a metaphorical level too, in terms of flight.
– The process of welding metals together, has its difficulties, which not many women choose with such passion. What is it that attracts you to creating sculptures via this method?
– I think that metal is both a solid material, yet at the same time very malleable. You can give it any form that you want. For me, it even resembles textiles. Basically it is difficult to use, it needs special tools/machines, it can get rather messy and smoky in the process… something that most women don’t like. But I like it a lot, and there are many female sculptors who have devoted themselves just to metal. 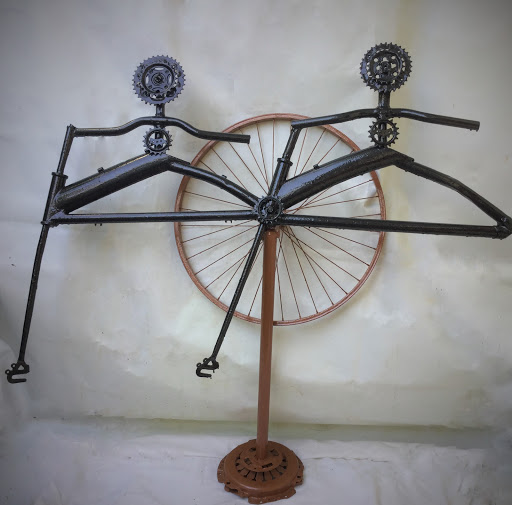 – Which sculptresses have inspired you?
There are many, but I especially am inspired by the work of Chryssa Vardea (known internationally as Chryssa). There is a work of hers at the Evangelismos metro station, which is a copy of a work on Mott Street (1983), influenced by Manhattan’s Chinatown. I also love her work Clytemnaestra (1967) which can be found today at the Megaron Mousikis Concert Hall. Another very unique sculptress is Natalia Mela who created animal forms (goats, a bull, cockerel, dragon and others), from metal.

– Your exhibition at the Bageion Hotel (a unique cultural space in central Athens, originally a grand hotel built in 1890-94), was an intriguing show that played with the dramatic cast shadows from your works. Tell us about this exhibition, and others that have remained unforgettable and important experiences in your artistic career.
– The exhibition at the Bageion (December 2019 ), was indeed a unique experience in an indoor space. However this space has such a historical aura about it that whatever you exhibit there is affected by it. I also had the opportunity to realise an interesting open-air show in Lefkada, and another memorable show was in the garden of the Black Duck Multiplate in Athens. These were all solo shows and very interactive, an important component in my work. 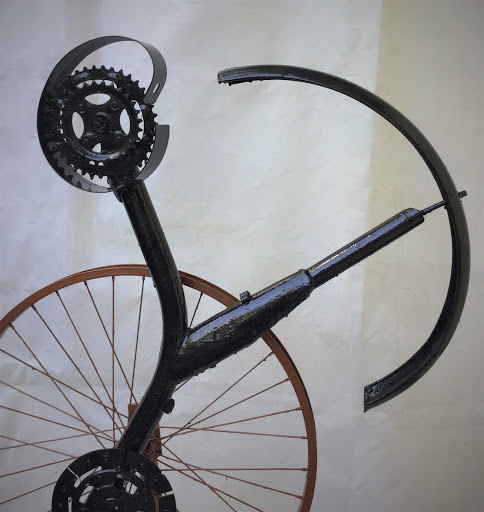 – How did the coronavirus pandemic affect you from an artistic point of view? Did you find this time of isolation creative or not?
– During the lockdown I found the opportunity to complete 10 works. Their first phase of creation had been realized in November-December 2019, but now they are totally complete. In this way, I didn’t have the time to focus on the fact that I couldn’t go anywhere I pleased. I must admit however, that I did miss going to various cultural events, but what can you do…
– What’s on the agenda now? Your future plans?
– I had arranged to present in Lefkada ten of my works that depict sports, before the coronavirus pandemic hit us. However I think that this project can still be realized, because it is an open-air project. So, hopefully it will be another summer art rendez-vous in Lefkada, for July-August 2020!