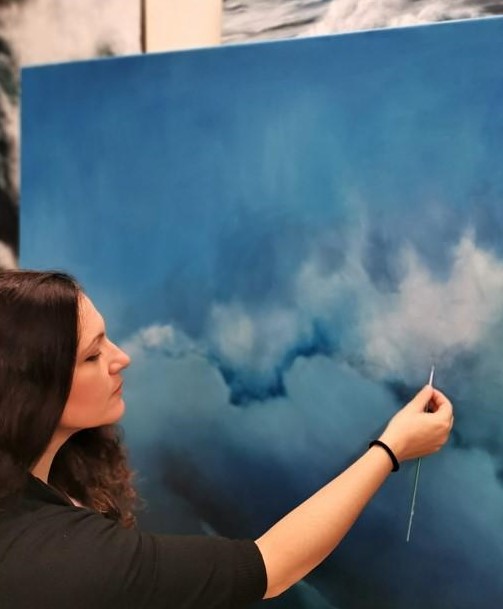 Stella Sevastopoulos caught up with artist Marina Syntelis, who found herself creating some interesting commissions during the lockdown, for customers abroad.

MARINA SYNTELIS has been hailed as one of the world’s finest hyper realistic seascape painters of today. Her powerful wave images have become especially popular over the past two years, and her rising recognition has been gained via the internet and promotion via social media accounts – the new promotion tools that many artists have preferred recently, and which for many of them have proved to be a lot more effective than being part of the gallery system. In a world that has all the more turned towards the internet due to the coronavirus epidemic, with even online exhibitions and auctions replacing physical ones, the art market and the whole global art scene have adopted this new platform for art promotion and art sales, as a way to beat the crisis:

– You are known as a painter of seas, rough seas in particular, with large crashing waves. How did you arrive at this subject-matter?

– I believe that all Greeks have the sea in their DNA. For me it is a never-ending source of inspiration, because the sea has a myriad of changing faces. It changes its mood the same way that we do, yet despite its kaleidoscopic character, it’s still the sea. The sea gave birth to life and yet remains unexplored and mysterious. All this grandeur of the sea is what I find challenging as an artist, when attempting to confront it artistically and to paint it, finding myself always having to come to terms with the angst of this confrontation. Through my art, I let the sea speak instead of me, about all the things that cannot be expressed with words.

– These powerful wave images were almost prophetic, considering the ‘virus tsunami’ that hit us, proving the power of nature. Did you feel like this about these works?

– Each and every one of us, in their own microcosm, is fighting with their own waves at certain periods of time. The coronavirus crisis created an enormous tsunami, and continues to do so, on a social level especially. Maybe now, there is a greater awareness towards nature and how it expresses itself. Maybe now, we are more aware of how powerless we are in the face of nature. For me, this is nothing new, but I wish that this awareness will touch the souls of many people.

– How did the lockdown affect you creatively?

– I think the same way that it affected many people. At first I was in shock, then moved on to a phase of insecurity, followed by denial, fear. That’s when my work as an artist functioned in a therapeutic manner for me, once again. My painting helped me realize and come to terms with my feelings, by letting them all out onto the canvas. After this process, which felt like a form of catharsis, I regained my balance once again, and my strength. 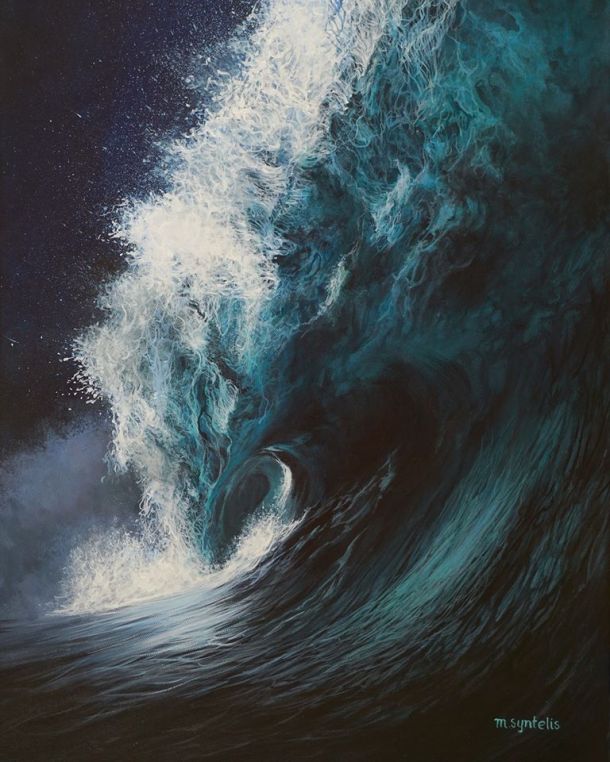 – Up until recently, you were an independent artist, who has managed to build a strong fan club around your work, especially through social media channels. Can you tell us about this whole experience of being an independent artist, and staying outside of the Greek gallery system, and why it is a choice that many artists are turning to these days?

– I believe that the internet has certainly acted as a catalyst in terms of the rising percentage of independent artists these days, because it allows every creative to promote their art form. That I find myself outside of the gallery system isn’t just a personal decision, because things just happened that way. When I first started promoting my work, about two years ago, I had no idea that it would be so popular. Things happened in stages, in a rather magical way. I would like to be able to collaborate with a Greek gallery in the future, so that people who are interested in my work in Greece, will have the opportunity to see it up close, in an environment other than my studio.
– What advice would you give an artist on how to go about promoting their work on the internet? What are the ‘snakes and ladders’ of this form of art promotion and art buying/selling, from your experience?

– For me, promotion was never my aim. When I started showing my work online, I was just interested in sharing the development of my work with a community of artists, to talk about the difficulties and aims of each painting. I never referred to prices, or made any promotional moves. Whatever happened, wasn’t my own initiative, because that’s the way I function as a person. I always treat everyone with respect, and if someone helps me, I try to help them back. I feel lucky because I never found myself in an awkward situation on the internet. On the contrary, I have found a lot of help and support and I feel obliged to give back the same. My only advice is, to be patient. We never know when we post something on the internet who will end up seeing it, and what ‘ripples’ it will create.

– In Greece the arts in general have suffered greatly from the decade of the economic crisis. Art in Greece is considered a luxury and the money spent on it is limited. This is saddening for a country that played such an important role in the arts in the past. I hope that in the near future, the Greeks’ relationship with art will be reignited, especially when they realize that art can provide many things to many people – a panacea of sorts – and it is not just for a small, exclusive group. I don’t have a picture of what’s going on in the art schools of Greece today, however I think that the academic approach which I had experienced when I was a student there, which was rather different from what was happening abroad, gave my generation of artists a strong foundation and great discipline, which are very useful, even if you decide to discard them later, when exploring your own artistic process. 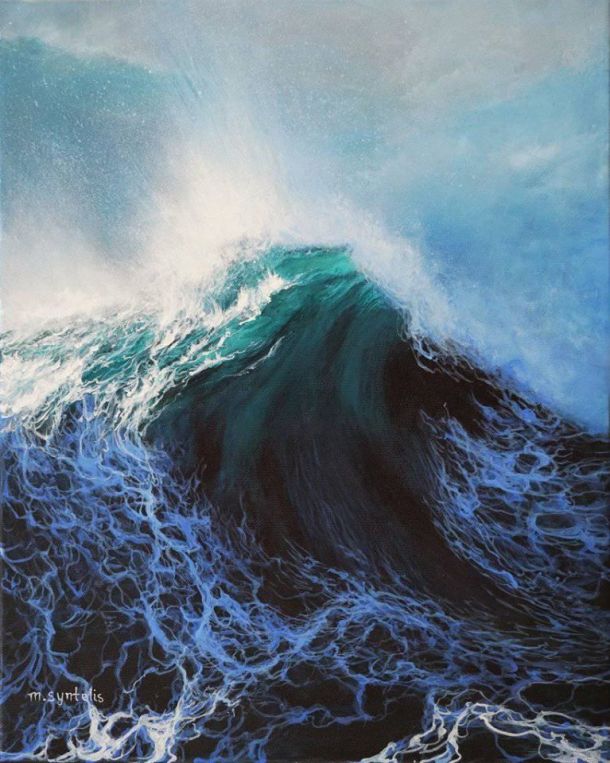 – More recently, you were discovered by the English art dealer Steve Burnage (of The Papillon Gallery), who has found that your work is also popular with collectors in the UK. Tell us a bit about this new development in your art career.

-As I mentioned earlier, everything happened in stages. This particular collector, dared to buy a work of mine online (and I say ‘dared’, because many people are not so trustworthy of buying work they haven’t seen up close, for real) and when he received the work, he realized that the subject, technique and quality of my work could be attractive to certain art circles in the UK. After he bought a second work, and was again assured of the quality, he decided to sell my work at the NEC Art & Antiques For Everyone, and at the Mayfair Antiques & Fine Art Fair. When these works were sold, he made me an offer, to be the sole representative of my work in the UK. Although a solo exhibition we had planned in England will be delayed now due to the pandemic, he has however organized a virtual solo show of my work, which was just launched online. I’m sure that when we return to ‘normality’, the exhibition will also be back on track.

– You have often taken on commissions. What are the pros and cons of commissions versus your own independent creations?

-I have just completed my third large-scale commission, and at the moment I’m working on another one. This experience has allowed me to realize that each commission is different. I am a person who by nature loves challenges, and that’s how I see the commissions. At first, I was more insecure about them. What helps however is if I am in constant communication with the buyer. It is important for me to have understood exactly what the buyer wants from me, and that I have also explained exactly what I can create. Some clients are freer in terms of what they want, while others are very specific, and in these cases I have to be as disciplined as possible! The feeling of satisfaction that I get when someone receives their commissioned work and they see that it is exactly as they had imagined it, is something that only an artist can understand. You feel like a winner, but also financially, commissions offer an artist a sense of security.

– What are your future creative aims/plans?

– At this moment in time, it would be ironic to make long-term plans. However, I am at the moment preparing my own website, and I’m continuing to paint, hoping that the future will hold some pleasant surprises this time, for all of us!