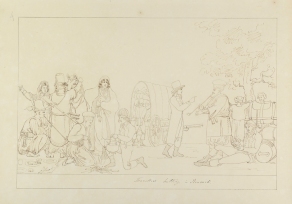 THE REGENCY style’s ‘philhellenism’ is evident in its penchant for ancient Greek design elements (plus Roman and Egyptian). One of its greatest exponents, was Thomas Hope (1769-1831), who also had a great love of Oriental culture and style, as evident in his 60 drawings of Istanbul, that are on display these days at the Benaki’s Islamic Museum. Hope’s drawings (a total of 350), were bought by Antoni Benaki back in 1930. However they got lost and forgotten somewhere in the Benaki Museum’s archives for many years, before being rediscovered in 1984. The current exhibition, ‘Thomas Hope: Drawings of Istanbul’, runs till September 29.
Thomas Hope cuts an interesting figure in history, especially because of his view of the Greeks during the Ottoman years, as expounded in his book ‘Anastasius: Memoirs of a Greek’, which was first published anonymously in 1819. It tells the tale of a Chiot who embarks on a long journey, firstly towards the East, and who in the process changes his faith – from Greek Orthodox to Muslim but also flirting later with Catholicism even, for opportunistic reasons. In her paper ‘Degeneration, Regeneration, and the Moral Parameters of Greekness in Thomas Hope’s Anastasius, or Memoirs of a Greek’, Ludmilla Kostova describes how Hope’s book focuses on the dire situation of the Greeks under the Ottoman Yoke: “The fictional ‘autobiography’ of a modern Greek with ‘droguemanic blood’ and Phanariot connections could be used to highlight key aspects of the Greek condition.’’ She goes on to say that “The novel repeatedly stresses the alienation of modern Greeks from their classical legacy. Hope shares a view frequently expressed in Western European travelogues and historiographic commentaries of the time according to which the modern Greek condition has reversed the Enlightenment paradigm of human progress from ‘rude’ barbarism to civilisation. As a result modern Greeks are assumed to have lapsed into a state o f child-like primitivism.” The Byronic, anti-hero of a Greek Anastasius, is the prime example: he shows no real moral or ethical stance to life, and an abhorrence even towards his country of origin. Later in the book – after he finds out he has a child – he seems to change his stance.
Like many of his young fellow English gentlemen of the late 18th century, Thomas Hope (1769-1831), a scion of a wealthy banking family, went on a Grand Tour – the traditional trip to Greece and Turkey. Hope was a unique virtuoso, with collections of antiquities, sculptures and European paintings, plus a generous sponsor and an expert in the fields of architecture and decoration. He overturned the artistic settings of his time, leaving his mark on the Regency period. He created the ‘Hope style’ which he spread through a series of illustrated manuals with designs for functional and decorative items, as well as a repertoire of costumes.

As evident from the current exhibition, Hope was an extremely gifted designer. He meticulously painted a variety of themes from the places he visited during his Grand Tour. He sorted and held these designs tied in five volumes which he kept in his personal library. After his death, these volumes were sold by his inheritors and all traces were lost. Fortunately however, in 1984, all five volumes of drawings were found in the Library of the Benaki Museum. This unique finding of the 350 works constitute a treasure of information on the places illustrated: Some depictions of Egypt, a larger set depicting views from Greece, while the largest part is dedicated to the various regions of Turkey, mainly Istanbul.

The current exhibition at the Benaki’s Islamic Museum presents Thomas Hope’s love of the capital of the Ottoman Empire, as evident through his topographic views and folding panoramas of Istanbul and its environs: Ottoman palaces, halls of the seraglios, gates, mosques, funerary monuments, fountains, gates, the yalı on the Bosporus, the sultan’s entertainment boats. Other scenes include market shops, coffee shops, images of various men, women with children of Istanbul, depictions of costumes, architectural details, accompanied by lengthy explanations and descriptions with comments. The works are of excellent quality because Thomas Hope was an unparalleled designer, a virtuoso of linear draftsmanship comparable to the qualities of a miniature painter. His animated outlines combined with delicate colouring, allowed him to depict details of the buildings and the costumes in an awe-inspiring manner.

However, the importance of the Thomas Hope collection is not limited to the aesthetic pleasure it offers to art enthusiasts. The designs constitute a unique treasure of visual testimonies for the scholars of the Ottoman civilization: Firstly, the date of the works (18th century), makes this corpus an important early account, since this period is rather poor in testimonies of Turkey, as it was in the 19th century when most European artists made their way to the Middle East. A second and equally important element that distinguishes the works of Thomas Hope from other pictorial sets of similar themes is the accuracy of his depictions. As it is well known by scholars, although many artists-travellers worked on-the-spot, they were apt to changing or distorting the actual features of the subject matter (landscape, architecture or people) in order to create impressive compositions. This phenomenon altered the documentary value of the scenes and the alleged visual evidences. This is not at all the case with Thomas Hope, whose designs are of a precise documentary nature. Moreover, the thematic variety of the collection is unsurpassed, making it a reference point for scholars of various disciplines, especially of the Ottoman era, such as historians, architects, folklorists, costume designers etc. For Istanbul in particular, this is an inexhaustible corpus of material that allows one to reconstruct a panoramic portrait of the city in the 18th century with authentic representations of the landscape, architecture, residents and everyday scenes. Finally, seeing as it is unpublished as a whole, it will be highly appreciated by the international academic community.

‘Thomas Hope: Drawings of Istanbul’, is accompanied by a bilingual publication (in Greek and English) and includes images of the works and texts on the artist and his era by the curators of the exhibition Dr Fani Maria Tsigakou, art historian and Mina Moraitou, curator of the Benaki Museum of Islamic Art. The exhibition is supported by the Culture and Tourism Office of the Turkish Embassy in Athens.