PRESENTING avant-garde contemporary art in the most sumptuous of historic buildings, creates an interesting visual oxymoron, for example: between strict, stark cryptic conceptual creativity and an elaborate, eclectic colonial spirit as evident in the neoclassically inspired Goulandris Museum of Cycladic Art’s Stathatos Mansion. Here, you’ll find the ‘DESTE Prize: An Anniversary Exhibition, 1999-2015’ being hosted, till September 17. And you will get a chance not only to admire Ernst Ziller’s architectural masterpiece of 1895, which the Bavarian architect had originally designed to be the home of ship-owner Othon Stathatos and his family, but also the contemporary masterpieces of the DESTE foundation’s award-winning artists: Loukia Alavanou, Anastasia Douka, Eirene Efstathiou, Christodoulos Panayiotou, Maria Papadimitriou, Angelo Plessas, Georgia Sagri, Kostas Sahpazis, and Panayota Tzamourani. 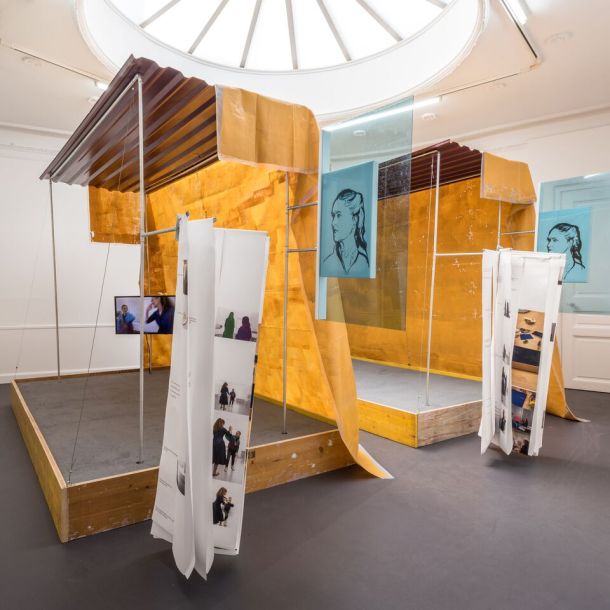 This is not the first time that the Stathatos Mansion is hosting a contemporary art exhibition, seeing as in recent years, the Museum of Cycladic Art has often organized such shows here, within the context of its ‘Young Views’ programme. It is however the first time that works by the nine recipients of the DESTE Prize have been gathered under the same roof. Established in 1999, the DESTE Prize is awarded biennially to a Greek or Cypriot artist living in Greece or abroad. The prize aims to showcase an emerging generation of artists and is integral to the foundation’s policy of supporting and promoting contemporary art.

There is one room in the Stathatos Mansion, right across from the main entrance, that is certainly one of the ‘jewels’ of this building. Flooded with light, due to its many windows, it looks like a Victorian glass patio of sorts, decorated with a border of elaborately designed green tiles. Undoubtedly the sheer character of this room makes it a difficult place to intervene in artistically. Nevertheless, artists have been invited over the years to do so, with interesting results, especially when it comes to how they have dealt with the imposing, grandiose chandelier that hangs from the ceiling: Back in 2012, Jannis Kounellis decided to cover it with a black cloth, while last year Ai Weiwei complemented it with a standing chandelier work of his own, shaped like a weeping willow tree. But in the case of Maria Papadimitrou’s current installation, ‘Unpacking Antigone’, the chandelier, all 750 kilos of it, simply had to go. “I removed it, because it was the only way to install the protagonists of my drama”, states Papadimitriou. In its place, you will now find hanging animal skins.

Papadimitriou’s work here is the sequel to another: ‘Laboratory Antigone’, that was hosted at the Onassis Foundation in New York as part of the ‘Antigone Now’ programme of events that had been organised there in 2016. This work lead Papadimitriou, together with curator Yorgos Tzirtzilakis into a long journey, not only to the Big Apple and back, but also to the essential core of what Sophocles’ drama was dealing with: Antigone is both a transgressor of the laws of her city, but also deeply loyal to her family, but at the same time, she is also carrying out her own ‘death wish’. All these notions are suggested in Papadimitriou’s installation that presents us with Antigone’s drama, now packed into boxes, ready to be recreated by the viewer, while above them hang the hides.
Papadimitriou represented Greece at the 56th Venice Biennale (2015), and the current installation has also been linked with the work ‘Why Look at Animals? AGRIMIKA’, which she had presented back then.

In another room, you will encounter Panayota Tzamourani’s video works, with their mesmerizing flow of superimposed images. Fire becomes a symbol of catharsis in her work, and has been inspired by the ritualistic use of fire in Greek tradition (eg the bonfires of St John). In the video work ‘Golden Cage’, images of birds in cages blend with those of children behind the bars of their school. Notions of imprisonment and non-freedom are thus analysed. In ‘Breathing’ (2017), Tzamourani combines images of people and children in nature (the four elements are focused on especially: earth, water, air, fire). The catharctic properties of fire are focused on, or as ‘an agent of rebirth’ as described by Christoforos Marinos in the exhibition catalogue. 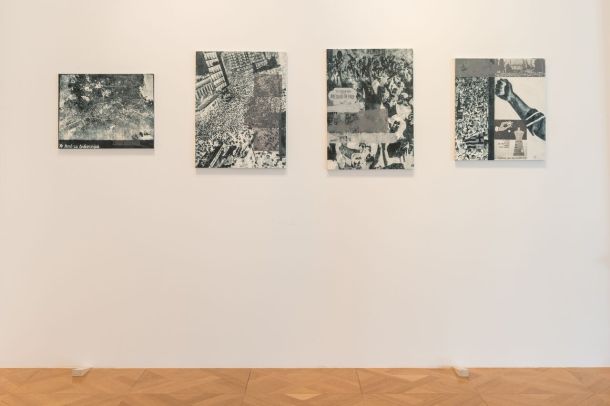 In Eirene Efstathiou’s series of works entitled ‘Other Things Can Happen in July Besides Swimming’ (2016), the artist has combined the printing techniques of lithography and silkscreen printing to create aesthetically evocative images which are also loaded with political meaning: they present newspaper clippings that depict the street protests of July 1965 (when the Greek Prime Minister Georgios Papandreou was forced to resign), plus from the demonstrations of July 2015, due to the public referendum that took place in Greece (on July 5). The first photograph of Athens as seen from space is also included (another July event, of 1965). It was ironical that the day we decided to go and see this exhibition, there were also protests on the streets (yet again) in Athens, due to (yet another) general strike! 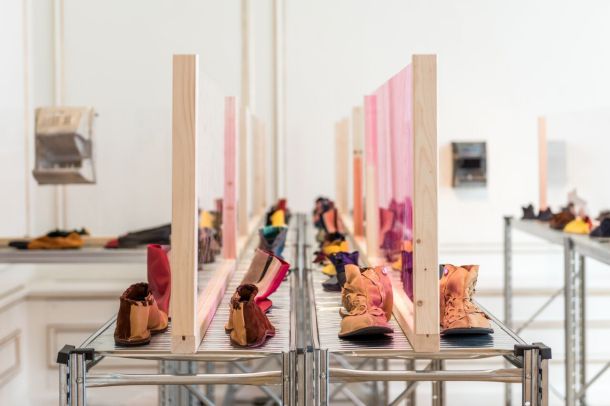 Then there are the products (a series of shoes), of Anastasia Douka’s collaboration with a shoe factory in Northampton, Angelo Plessa’s exploration of the internet and of modern day ‘talismans’ plus Christodoulos Panayiotou’s ‘medallion’, which was worn by one of the show’s invigilators, that you have to track down in order to see. Panayiotou has written the following about this work, which is entitled ‘Venetory fides inviolabilis bisante,’ (2015):
“Before catching the train I went to visit the burial monument of Marco Antonio Bragadin. He was a Venetian hero who met an atrocious death at the end of the Siege of Famagusta, in Cyprus. He was skinned alive and … His story is difficult to tell. Back then it marked a schism between the East and the West that is similar to the one occurring right now. The story of Marco Antonio Bragadin is impossible to tell, but it should be staged in our pavilion. To do so, I have brought one of the copper coins he produced in 1570 as a promise to his soldiers. I’ll turn it into a pendant. It should be kept close to the skin.” (Panayiotou represented Cyprus at the 56th Venice Biennale, 2015, where he originally presented this work). 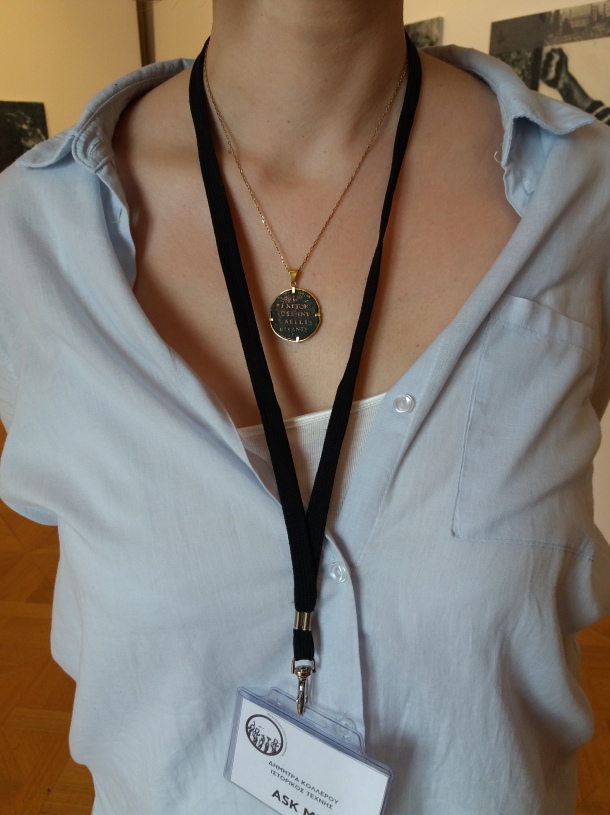 ‘DESTE Prize: An Anniversary Exhibition’, is accompanied by a handsome catalogue, which provides plenty of material on the artists and their practice, thus providing the viewer with a more indepth understanding of the show. I mention this, because it seems that all the more cutting-edge contemporary art shows are completed by their catalogues, because of the increasingly complex conceptual nature of this kind of art.
• The  Goulandris Museum of Cycladic Art’s Stathatos Mansion is on the corner of Vasilissis Sofias Ave & Irodotou sts. Open: Mon, We, Fri, Sat 10-5; Thurs 10-10; Sun 11-5; Closed Tues. 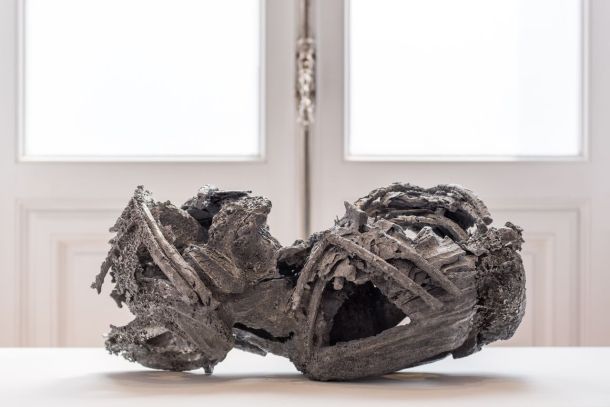