WHEN WORLD-RENOWNED Argentinian artist Adrian Villar Rojas agreed in December of 2015, to take on NEON’s proposition – to conjure up one of his astoundingly original site-specific installations at the National Observatory of Athens and the Hill of Nymphs – I’m sure that no one could have imagined the outcome. But that’s the thing with Villar Rojas – he’s full of beguiling visual and conceptual surprises: from his humongous whale stranded in the forest of Patagonia, to his creatures emerging from the Sea of Marmara. What’s more, his site-specific works, are made to be destroyed. His current intervention in the heart of Athens is part of a nomadic sequence of art events that go by the title ‘The Theatre of Disappearance’, for which he has also created hybrid sculptures based on detailed replicas of around 100 objects from the Met Collection, at the Metropolitan Museum of Art (New York, runs till October 29). Villar Rojas has also created a ‘Theatre of Disappearance’ installation at the Kunsthaus Bregenz (runs till August 27).

You have until the 24th of September to immerse yourself in Villar Rojas’ Athenian ‘Theatre of Disappearance’, which includes a ‘plantation’ of 46,000 plants that he has installed around the Athens Observatory – turning what was mostly an arid, rocky landscape, into a verdurous paradise. From wild grasses to artichokes and pumpkins plus melons ready for eating. And loads of corn. It will be interesting to see how this riot of green in the centre of Athens, will develop (seeing as the corn hasn’t fully ripened yet). 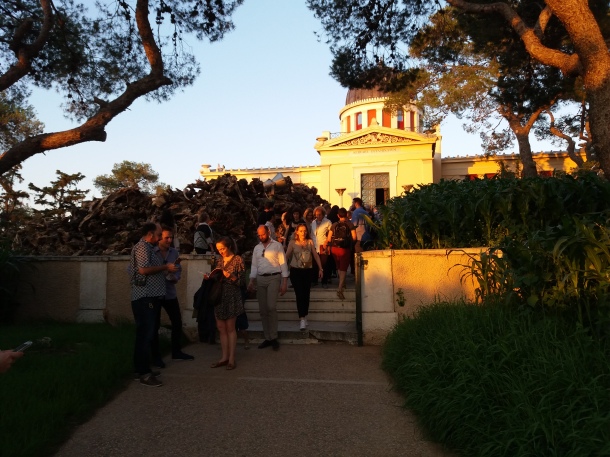 At the Athenian inauguration ceremony (June 1), the artist did not refer to his 4,500 m2 in situ work as ‘art’, claiming that he has a problem with this word, but instead, preferred the word ‘thing’, welcoming the public to explore and ‘get lost’ in this ‘thing’. Elina Kountouri, the director of NEON, and curator of the current show, explained how the environment that Villar Rojas has created here is ‘seamless’, and looks like it pre-existed – and this is exactly the case. She also stressed how this project has seen to the collaboration of quite a few institutions (the Ministry of Culture and Sports, the National Observatory of Athens, the Archaeological Council of Greece, the Central Council of Modern Monuments) with the private non-profit organisation NEON (founded by collector/businessman Dimtris Daskalopoulos). Among the large team of people that worked on this project, was Villar Rojas’ own team of collaborators (comprising production/construction/art professionals), who relocated to Athens in order to realise this work.

Apart from this fabulous leafy haven, Villar Rojas has also created two more very contrasting environments here: he has ‘cloaked’ the interior of the Athens Observatory with grey curtains which hide nearly every one of its contents, apart from a few chosen items, which the artist has focused on, including some views of the Acropolis peeking through the windows. It’s a kind of disappearing act. It’s also easy to lose your orientation in here, and end up looking under the curtains to find the ‘exit’, only to find rows of antique books instead. 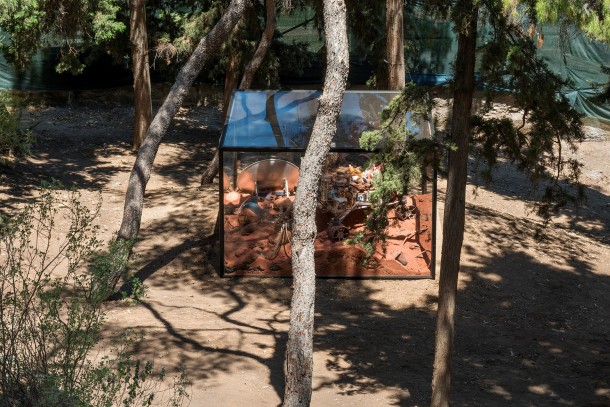 The other section of Villar Rojas’ intervention, is described by Kountouri, as a ‘war zone’. Here, you have to explore the works enclosed in glass vitrines exhibited on earthy slopes and in rocky caves. Be sure to wear trainers.
For me, the ‘war zone’, was also like an open-air museum – maybe inspired by the fact that this whole area in the centre of Athens, is a bit of an open-air museum, scattered with encounters of the archaeological kind. In one of Villar Rojas’ vitrines, you’ll find a fallen replica of the ‘Victory of Samothrace’, covered in graffiti. In another, the products of the garden he has planted (leaves, pumpkins etc), have been laid to rest… and rot. A replica of the famous fossilised bones of the 3.2 million year-old Australopithecus known as ‘Lucy’ is to be found in another glass case while a space vehicle (‘Curiosity Rover’) is to be found in another. And that’s just some of the objects you’ll peruse in this section, which on the whole explores the notion of human colonisation, colonialism, imperialism and territorialisation (among other things) through the ages and cultures: from ancient Greek conquests, to the Falklands, to humanity’s steps in space.

The National Observatory was completed in 1846 (designed by Danish architect Theophilus Hansen), at a time when Greece was still forging its new identity as an independent state, finally free from Ottoman hegemony. It is here, in the late 19th century, that scientists designed the first large, detailed topographical map of the moon (drawn by Simon Ploessl). Today, you can gaze at the stars here, but the Observatory is also a centre for scientific research, a provider of cultural/educational programmes, and also functions as a geodynamic institute.

Villar Rojas was born in Rosario, Argentina, in 1980. His monumental installations, often made with clay as the primary material, have been exhibited around the world and at the most prestigious spaces/museums/galleries and biennials. He has exhibited in Athens before, in 2014 at the Gennadius Library of the American School of Classical Studies. In 2011 he represented Argentina at the 54th Venice Biennale. He lives and works between Rosario and New York.
• Open to the public 11am-9pm, Wed-Sun. The site is accessible from the Dionysiou Aeropagitou walkway that runs under the Acropolis. Nearest Metro: Thission, Acropolis, Monastiraki.

3 thoughts on “The verdant, the vitrines and the vanishing act: Villar Rojas’ Athens intervention”