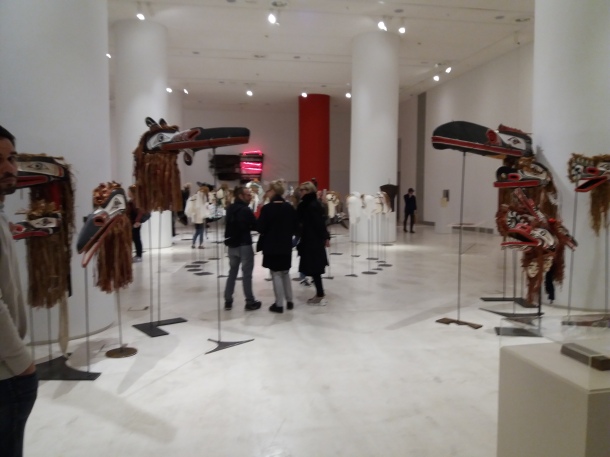 WHERE TO START? I had to visit the National Museum of Contemporary Art (or EMST), twice in order peruse the works of around 80 artists that have taken over this museum – the main venue of documenta 14 in Athens. This is a show dense both in terms of the many meanings/philosophies and messages it expounds, but also in terms of the shear amount of art on display; Something that might have been criticised by some, but which for me was a welcome change to the museum’s former vast empty spaces. It was as if EMST had come to life – choc-a-bloc with art on all floors, for the first time. I heard many people commenting on how beautiful a museum it is. Here are some of the highlights: 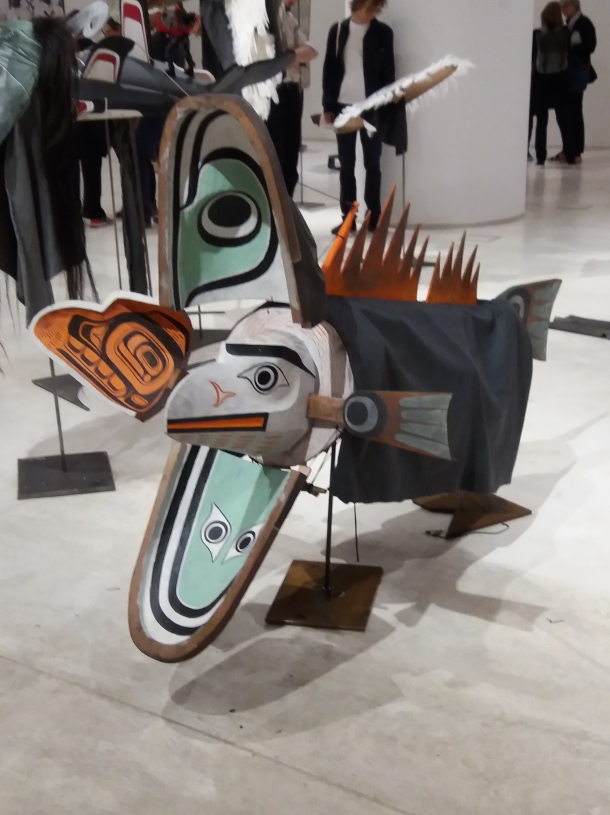 So, EMST is now packed with art from many corners of the world, accompanied by their socio-political and historical baggage: from Olu Oguibe’s ‘Biafra Time Capsule’ which takes us back to the effects of the Nigerian Civil War in the late ‘60s, to the Iranian poet Forough Farrokhzad’s avant-garde ‘60s film, to Edi Hila’s artistic discipline which offended the communist ethics of ‘70s Albania. From Tahiti today to divided Hebron, Hitler to Hellenism, from the spirits of Kwakwaka’wakw, to the Gods of Ancient Greece, and to the Christianity of the Congolese. You will travel to many places, decades and cultures… with the exhibition’s works’ main timeline spanning from the 2nd half of the 20th century right up to the present day. However, there are many works that are influenced from much more ancient epochs… and others that do not fit into the aforementioned timeline (because there always exceptions to the rule). 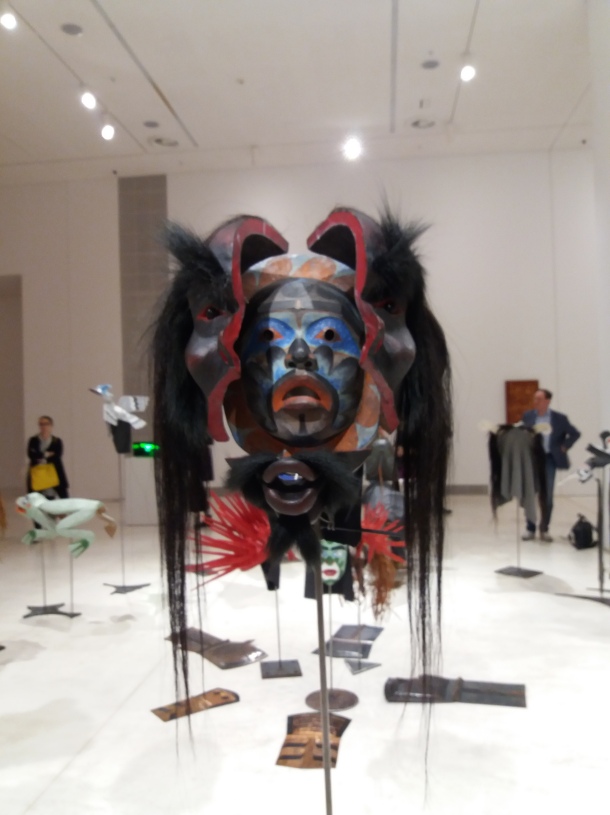 Take for instance the exhibition’s starting point (beyond Marta Minujin’s installation ‘Payment of Greek Debt to Germany with Olives and Art’ that greets you in the museum’s foyer),the ground floor’s main hall, explores the primordial and primitive, with a touch of Diogenes (plus a fair amount of copper): it is dominated by the work of British Columbian artist Beau Dick, who passed away this year on March 27, aged 61. Born in a Kwakwaka’wakw village north of Vancouver Island, this artist’s wooden sculptures and masks are inspired by his indigenous roots. On a different note, Dick’s ‘Copper Ingot made from discontinued Canadian pennies and letter giving permission to alter the currency’ (2013), connects with Dan Peterman’s recently realised ‘Athens Ingot Project (Copper)’ situated nearby. Works by Greek artists Steven Antonakos, Chryssa, Bia Davou and Vlassis Caniaris are also to be found here. Caniaris’ ‘Aspects of Racism’, and Sammy Baloji’s ‘Tales of the Copper Cross Garden: Episode 1’ are to be found on either side of the hall’s entrance. In the latter work, a video depicting the hard labour of the Congolese in a copper factory, is connected with the angelic voices of a church choir, and a blown-up photo of a Congolese Christian choir. 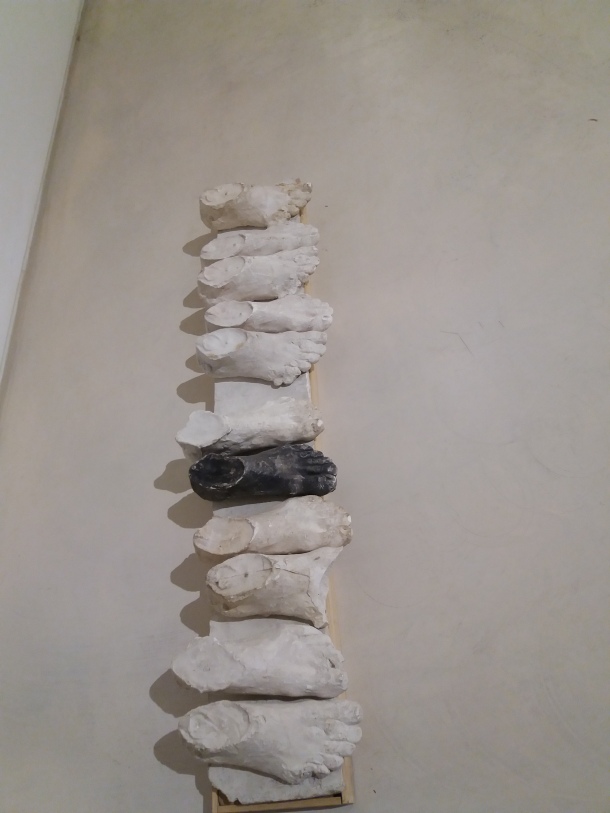 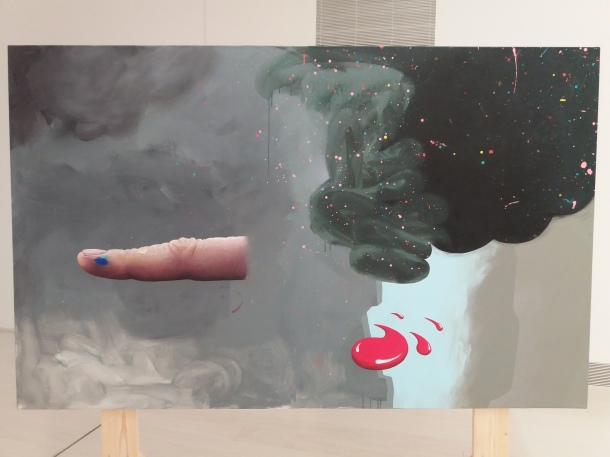 On the first floor, love and the libidinal are among the topics explored, plus dialogues of genders. Ashley Hans Scheirl’s paintings might be more abstract in their rendering of various sexual acts, but the same cannot be said of Terre Thaemlitz’s video work ‘Interstices’ – a queer exploration which presents what lies between the boy/girl genders, or even the pains of converting from one gender to the other. Doctors’ statements such as “It’s easier to poke a hole than build a pole”, or a discussion of the immediate surgery of intersex babies are included, while all sorts of pornographic, but also romantic imagery (and excerpts from reality shows), pass from the screen. As you can imagine, this video work is curiously popular. It is (wisely) screened in a separate room. I watch a mum leave the video’s room, and get interrogated by her kids outside: ‘what was going on in there?’… they were very curious to find out, especially when they saw her flustered face, when she said “Oh, nothing much”. But although not child-friendly, this work certainly confronts some gender issues in an in-your-face manner, opening debates of all sorts that are coming to the fore in contemporary society. 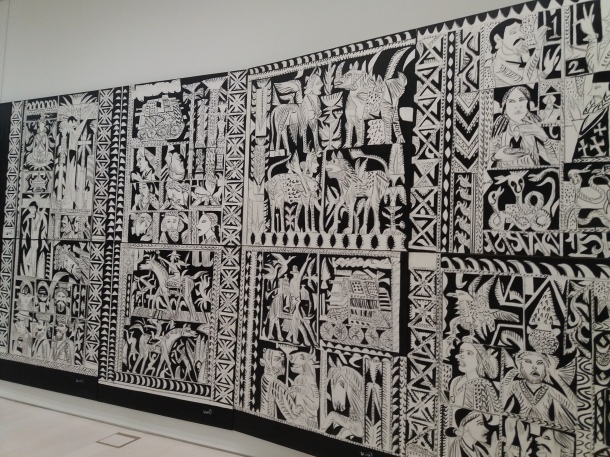 The giant black-and-white canvas screen by K.G. Subramanyan lies just outside the aforementioned video’s room, creating an effective contrast with its religious pluralism, and its sombre message of the dividing ways of religions. Subramayan’s comment on his work, entitled ‘War of the Relics’, goes like this: “To some, truth is single, to some others, many. And yet all devise special signs and symbols, rituals and relics to demonstrate its basic unity. But with the passage of time, these fail to fulfil this function. They become opaque and private. Instead of leading the human being to a vision of the total truth underlying even the differences, they do the opposite, distancing person from person and bringing in silly confrontations. These bring the beastly features in human behaviour to life, baring one’s tools of assault, filling one’s eyes with suspicion, one’s mind with hate and distrust. So the relics and other devices that were meant to inspire and unite divide and cause dissension.”

On a very different note, Hans Eijkelboom’s video work ‘The Street & Modern Life, Birmingham, UK’, (2014), presents us with how mainstream culture seems to be the new religion: influencing our appearance, dress code, and mobile phone obsession.
The exhibition then progresses to the labour side of things: paintings glorifying the past socialist ‘work ethic’ from Tirana’s National Gallery of Arts connect with other ‘workers’ – such as Greek artist George Lappas’ two furry ‘gardeners’, or Wang Bing’s Chinese workers and their everyday life, as presented in his latest film ‘15 Hours’ (2017). 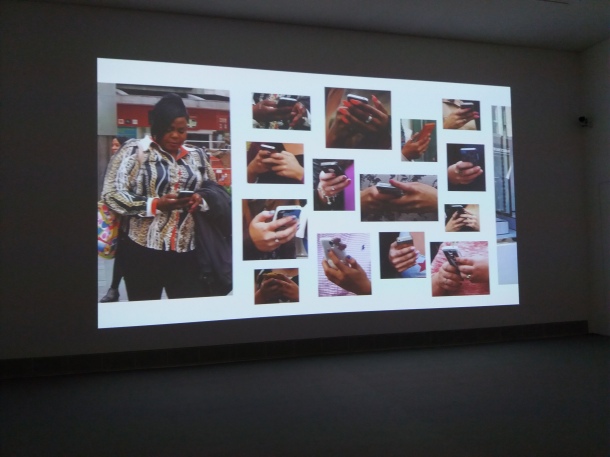 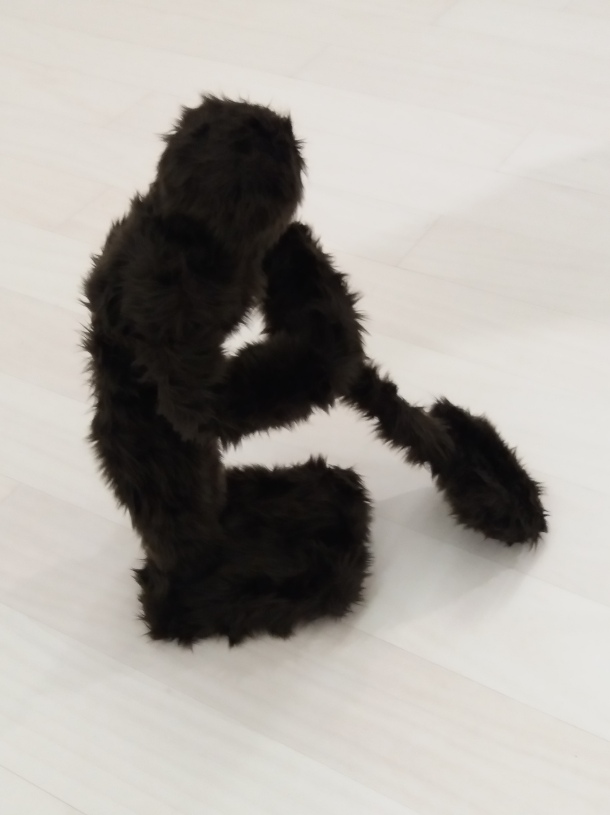 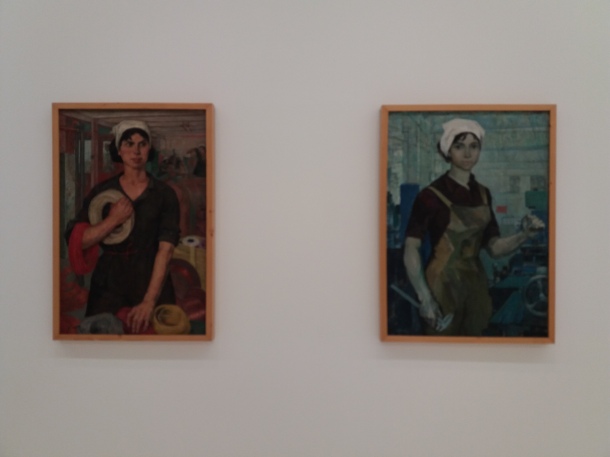 On a different note, a darker shade of communism is encountered by Albanian artist Edi Hila, who because of her painting ‘Tree Planting’, was not allowed to take part in artistic activities for around a decade, but instead was sentenced to labour in a poultry factory. Her sketches from this period however are presented, alongside a statement of hers:
“These are sketches and drawings made using various techniques. They were inspired by my work at a poultry breeding farm. This was an involuntary experience, a form of punishment after my painting ‘Planting Trees’ was criticized, because it apparently conveyed strong tendencies of Western ‘decadent’ art. Working at the plant gave me the opportunity to experience a reality unfamiliar to me until that time, a reality filled with problems and very interesting developments. I encountered the working class, considered the healthiest part of the Albanian society, capable of educating the new socialist breed. For me this experience served as a period of realization, extended reflection, and maturity. It altered my creative practice, not only in relation to life but also art.” 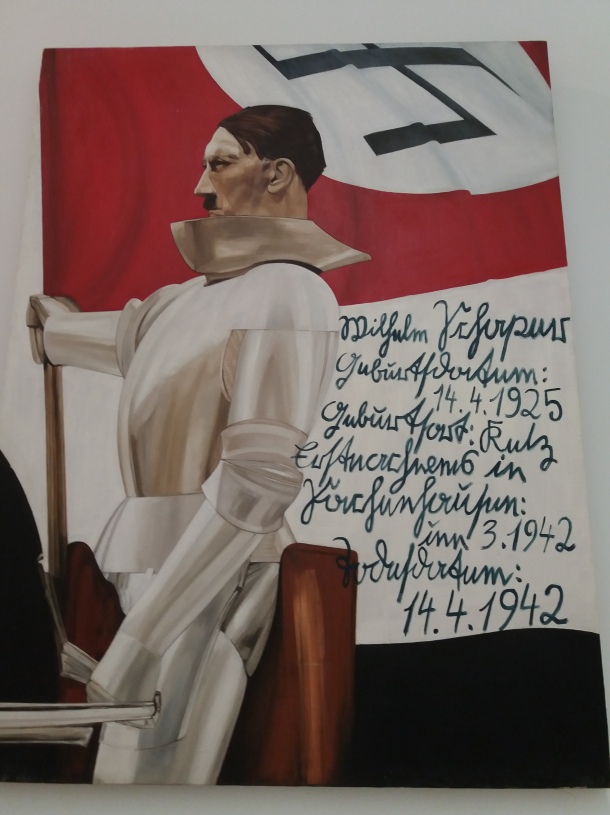 Tucked away in another room, is the installation ‘The Greek Way’ – where ancient Greek homosexuality, the Hellenistic principle and the ‘Golden Age of Greece’, plus the Third Reich’s Aryan propaganda are all interconnected. The paintings of McDermott & McGough from their series ‘Hitler and the Homosexuals’ (2001), present images of Hitler over-painted with the names of gay murder victims, plus their dates of birth/arrest/murder. On another wall of the installation, Piotr Uklanski’s paintings based on film stills from Leni Riefenstahl’s ‘Olympia’ (1936-38) are presented. ‘The Greek Way’ was a euphemism in the 20th century for homosexuality, at a time when western societies still had repressive attitudes towards openly gay men and women. 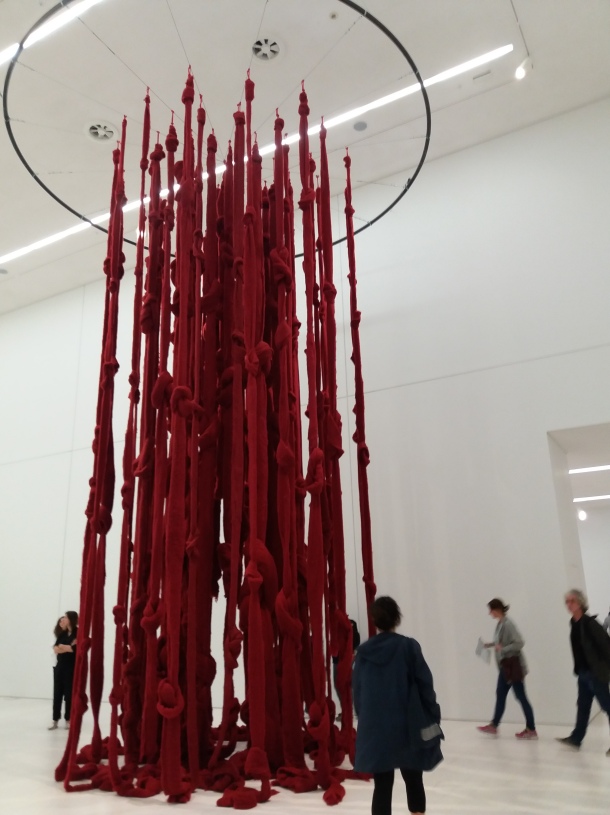 But let me now move onto another interesting section of this exhibition, to be found in EMST’s hall with the heighest ceiling: Cecilia Vicuna’s 8 metre-tall ‘Quipu Womb (The story of the red thread, Athens)’, (2017), made of dyed wool, dominates this space, and harks back to pre-Columbian culture. In the catalogue, Dieter Roelstraete describes this work (made especially for documenta 14), as follows: “Her recent Athenian quipoem consists of giant strands of untreated wool, sourced from a local Greek provider, dyed a startling crimson in honor of a syncretic religious tradition that, via the umbilical cord of menstrual symbolism, connects Andean mother goddesses with the maritime mythologies of ancient Greece.” Khvay Samnang’s ‘Preah Kunlong (The Way of the Spirit)’, which comprises 11 masks made of woven vines, are to be found here also, next to Olu Oguibe’s ‘Biafra Time Capsule’.

On the top floor of the museum, once past Lois Weinberger’s ‘Debris Field’ (2010-16), which presents objects excavated from the Weinberger family farmhouse in Austria, arranged in neat packages, rows and via photographs, you come across probably the most disturbing film in the show: Forough Ferrokhzad’s ‘The House is Black’ (1963) . Here, the life of an Iranian leper colony is documented: On the one hand it saddens you to see these people’s malformed faces and bodies, but on the other hand, the fact that they are depicted going through their daily lives and cultural rituals as if nothing has changed, presents their will to live, and their enjoyment of life. The film certainly presents the importance of ritual in human existence. (Maybe Victoria Hislop was inspired by this film too). 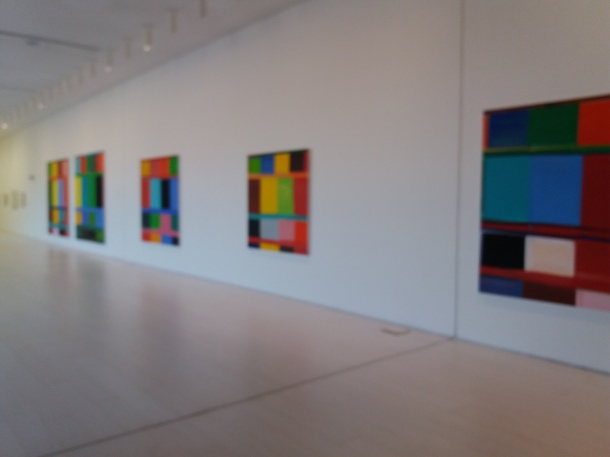 Things get colourful once past this black-and-white film, as if the sun’s rays have passed through the windows up here at the top of the museum, and have also passed through a prism, broken down into many colours, captured by the artists’ works: From Stanley Whitney’s large canvases full of blocks of colour, inspired by his Mediterranean adventures, to Synnove Persen’s ‘Sami Flag Project’ which breaks the flag’s colours down into a series of art works, to Wladislav Strzeminski’s ‘The Sun- The Heart of the Day’ (1948, from Warsaw’s Muzeum Narodove v Warszawie). We are definitely closer to the sun up here, and closer to rainbows. 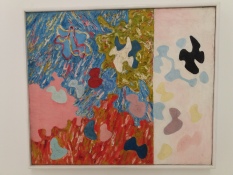 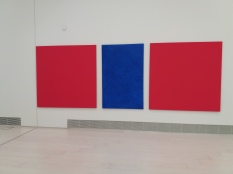 Things get even more ethereal up on the roof, where you will hear someone whispering to you… This is something you will also encounter at other venues of documeta 14: at the Athens Conservatoire, ASFA, Polytechnion, First Cemetery of Athens, Pedion tou Areos, and at the Panathenaic Stadium. But don’t worry, it isn’t a spirit, or a ghost, or a figment of your imagination. You have not gone crazy either, although this ‘listening excercise’, by Pope.L, entitled ‘Whispering Campaign’ is a clever sound installation that will heighten your hearing sensitivity for a little after. 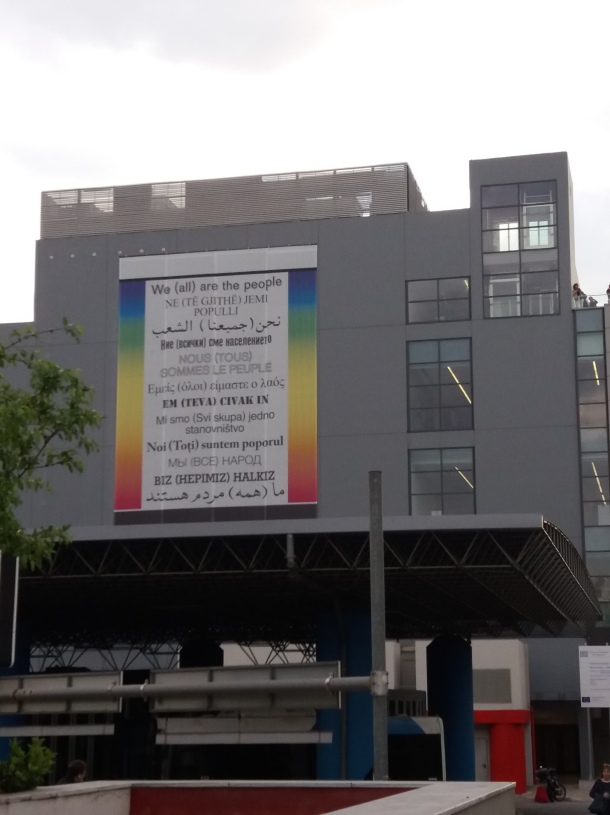 As I leave EMST, I catch sight of Hans Haacke’s rainbow-coloured banner hanging on one of the museum’s exterior walls: ‘We (all) are the people’, it reads, in many languages. My inner music box is activated, and the 1985 hit ‘We are the World’ starts playing in my head…
• The documenta diaries will be continued…