SPYROS KOTSALAS captures the raw, bold beauty of the Greek landscape and the nonchalant, everyday details of Athenian life. His oil paintings are odes to the quintessential colour harmonies of Greece, while his small gouache portraits capture the essence of the character of his sitters – the angles and contours of their features sculpturally rendered. Kotsalas’ paintings are incredibly balanced, serene works, full of light and optimism. Even grey urban reality is translated into a wonderful tonal testimony to the overlooked charm, and importance, of its infinitesimal moments, whittled down by the artist to almost abstract essentials. Kotsalas’ trilogy (of landscapes, portraits and urban scenes), comprise his current show entitled ‘Reduction of the Gaze’ (‘Αναγωγή του Βλέμματος’), at the Evripides gallery, which was inaugurated on June 15, and runs till July 29. 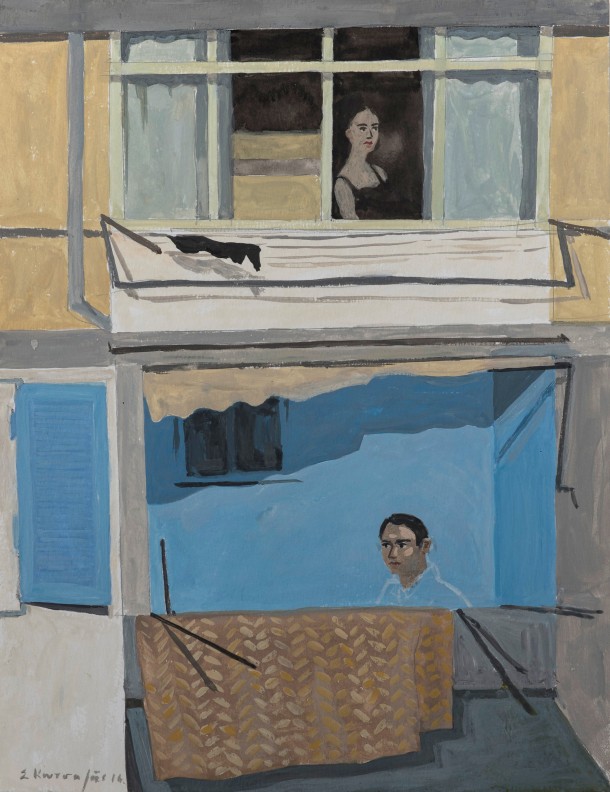 Kotsalas’ gouache urban scenes present us with the windows and balconies of apartment blocks and their human inhabitants. They are theatrical acts, of which we the viewers, are called upon to figure out the secret plot: Like the eavesdroppers and ‘nosey parkers’ from the opposite balcony, we are curious to find out what exactly is going on in these scenes, between the protagonists that peak out of dark windows, or stand on balconies. Who are they waiting for? Looking for? What is their life’s story? 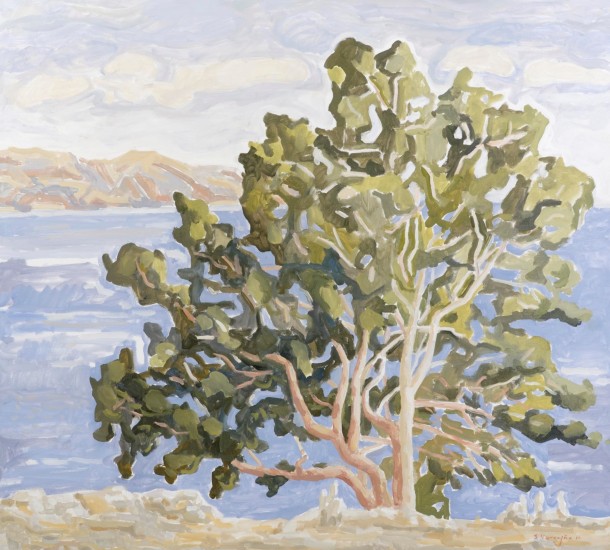 On the other hand, Kotsalas’ landscapes are examples of how nature is a boundless, eternal source of inspiration, that in this case has been reduced to its bare essentials, in order to focus on ‘what makes it tick’ in a sense: the enigmatic rhythms (e.g. in the sea currents and undulating mountain folds), plus their ever changing chromatic congruence – blues, ochres, greens and greys, all dictated by the powerful Greek light.
The strength of Kotsalas’ painting technique in combination with his devotion to the Greek landscape, whether natural or urban, coupled with the clean, minimal depiction of his scenes, takes us back to the roots of the history of Greek painting itself. Whilst conversing with Kotsalas at the show’s opening, he explained that his painting is primarily influenced by the Greek masters, plus Byzantine art. And certainly, there is a touch of Maleas, Papaloukas, of Parthenis, maybe even Tetsis, in some of his landscapes, whilst Tsarouchis comes to mind especially in his gouache works (the portraits and urban scenes). 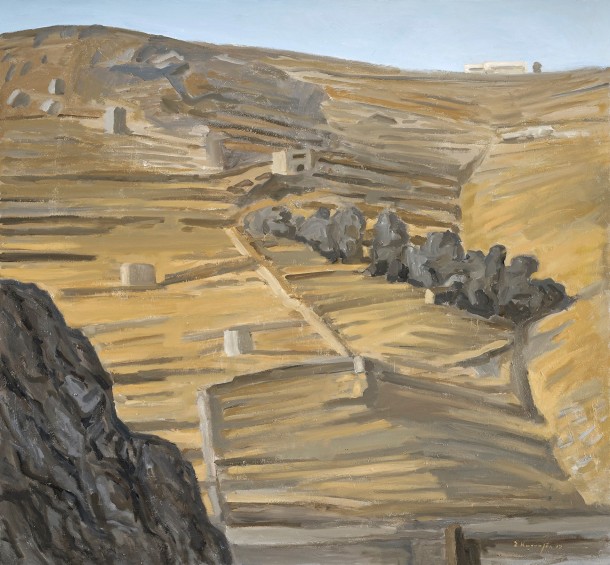 Of course, the aforementioned Greek masters were also influenced by the European modernist movements. Maybe that’s why for me, Kotsalas’ landscapes also speak of European modernism, and the ways of Cezanne, and his pre-cubist organisation of form and colour in the landscape. The way he depicts the sea currents and skies even bring Munch’s skies to mind, although without that foreboding Northern European ‘angst’ – in its place you will find some soothing Mediterranean ‘maniana’ instead.

Kotsalas was born in Mytika, Halkida, 1960. He studied at the Athens School of Fine Arts (1985-90), in the workshops of Vaggelis Dimitreas and Nikos Kessanlis. He graduated with honours. His works may be found in the collections of the Ministry of Culture, Komotini Municipal Gallery, Osaka Contemporary Art Centre, and in private collections in Greece and abroad. The artist lives and works in Athens, and has exhibited in many solo and group shows.
Also on at the Evripides Gallery:
On the ground floor of the gallery’s impressive neoclassical premises, you will also find Maria Yiannakaki’s light boxes and the photographic works of the gallery’s director Eirene Evripidou, who has recently published her second volume of poetry, entitled ‘Reveries of a Moon’ (in English and Greek, Aiolos Publications, also available at the gallery). 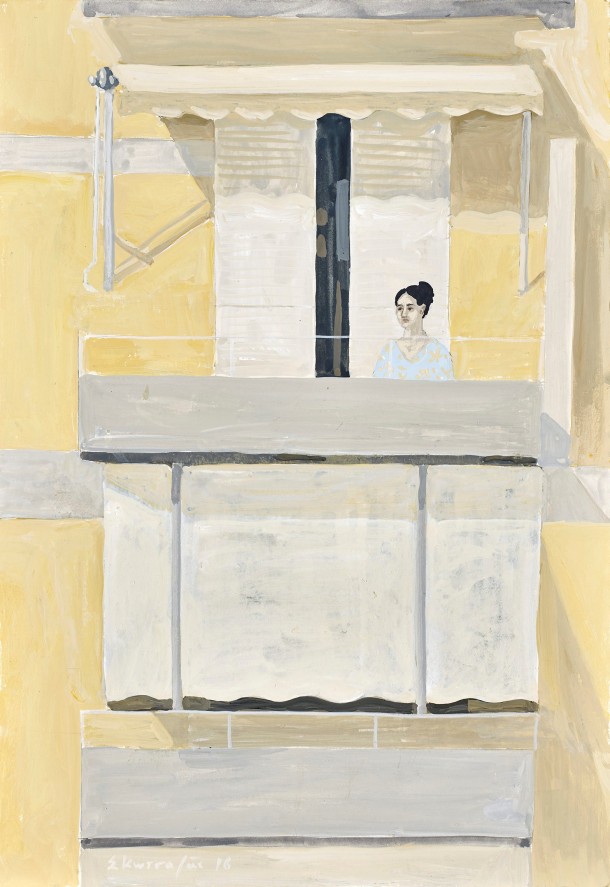