A partial view of Lin’s panoramic painting of Athens

Stella Sevastopoulos reviews the exhibition at the alternative art space Phoenix Athens, entitled ‘Out of the Cube Into the Green’:

IF YOU walk or drive up Asklipiou Street in central Athens, way up on the hill, you will eventually get to Phoenix Athens, an alternative art space which is providing artists both with a space to show their work, but also a studio in which they can develop it further, seeing as residency programmes for both local and foreign artists are also offered. The space is currently hosting the exhibition ‘Out of the Cube Into the Green’ until August 23, featuring works by Stefanos Kornilios, the Nilware team (Mitsis Poiitidis and Pavlos Palourias), Vasilis Galanis, Karl Heinz Jeron, Ioanna Lin, Eleni Tsamadia and Dimitri Yin.
The concept behind ‘Out of the Cube Into the Green’ has to do with thinking out of the gallery box, during this age of the pandemic, and connecting with nature, the natural landscape, and the sanctuary of the garden. It is an attempt to go beyond the concept of the gallery as a white cube, a western model which many would argue is becoming all the more outdated. The exhibition thus has gathered a diverse group of works together, ranging from the poetic to the peculiar: from Lin’s delicately-painted, six meter-long, panoramic view of Athens, to Jeron’s ‘Cryptids’. As if trying to bring life the inanimate, a reddish-coloured liquid is pumped along tubes (bringing to mind dialysis, or hospital scenes during the pandemic), and connecting Jeron’s 3-dimensional construct of plastic water bottles and real potted plants. Jeron’s ‘Cryptids’have been shown before at Fokianou art space, where they were emitting some strange electronic sounds. 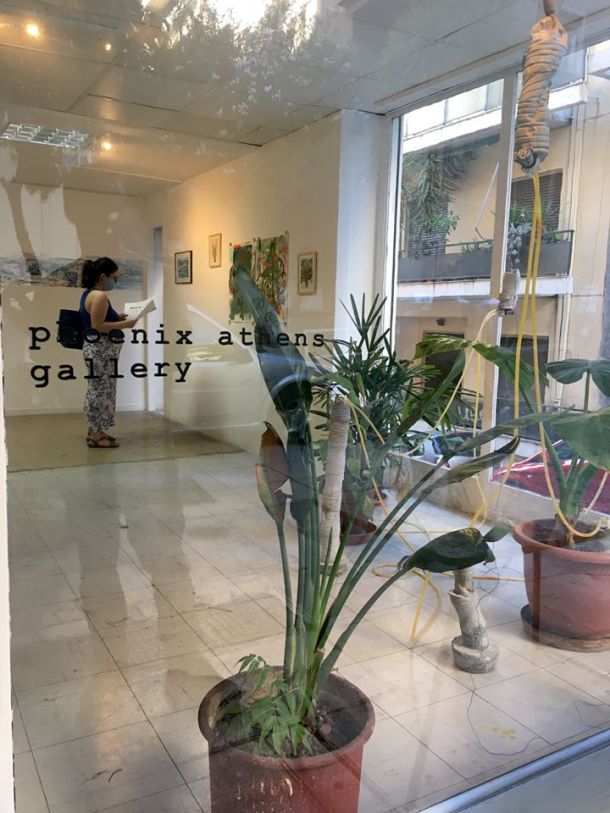 View of the exhibition from the gallery window

Yin’s mixed media and wood sculpture entitled ‘The Green New Deal Test Pilot’s Seat’, Galanis’ depiction of corals, Tsamadia’s rose petals and twigs preserved forever in resin, plus the Nilware team’s very economical digital prints (only at 7 euros), are also to be found in the vista of this exhibition. Futhermore, this collaboration of both Greek and foreign artists is testimony to how more and more artists from abroad are making Athens their new home, finding inspiration both in its cultural and natural environ.
Lin’s panoramic view of Athens, which runs across two walls of the gallery like an ancient Greek frieze, forms the main focal point of the show. Lin was formally trained in traditional Chinese painting at the Fine Arts Academy in Guangzhou and has now been living and working in “her spiritual hometown” of Athens for the past ten years. For this exhibition, Lin has pushed the limits of painting via this panoramic view of Athens, and has captured in her own authentic way, the majesty of central Athens and the surrounding region, turning Athens into something all the more exotic and Eastern, with her Chinese-influenced brushwork. Enchanted by the light and the people of her new home, Lin states the following: “The light of Greece has warmed my hand and heart fulfilling a secret purpose, a message of happiness and hope. From the docks of Piraeus to the lofty crags of Lycabettus, it fills the homes of the old and young, revealing their piety and secrets, untold prophecies and a yearning for another place. The Athenian exhales the gentlest breath, dissolving bitterness itself and sharing with every gesture, unfatigable kindness and understanding. At dusk the sea and sky is an envelope of azure that embraces the land. It comes and goes hastily like a lover you can’t touch and who knows you best.” 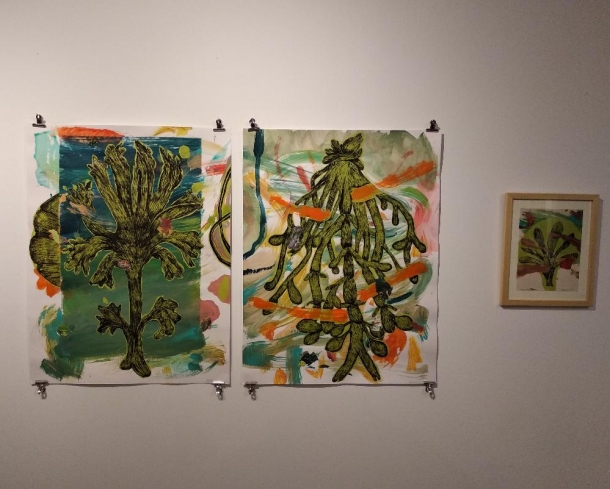 A bit more on Phoenix Athens:
Phoenix Athens is run by Greek-American artist Dimitri Yin and curator Christina Makri. After his classical training as an artist at San Diego State University in California, plus his years spent in London at Wimbledon College of Art, where he obtained his MFA in 2017, Yin decided that same year to found Phoenix space in Athens. The aim of this non-profit gallery and residency is to provide artists, academics and other creatives with the space, facilities and support they require to develop and showcase their work in Greece. The philosophy of the project is to demonstrate how art and design can inspire and transform society by generating and offering creative solutions and perspectives.
Those who decide to stay and explore their art practice here in the residency programme, will benefit from the tutelage of the space’s collaborating artists, who aim to help artists to delve futher into their practice, helping them develop, explore new techniques, methodologies, processes of thinking etc. The art works created during the residency then go into an exhibition. 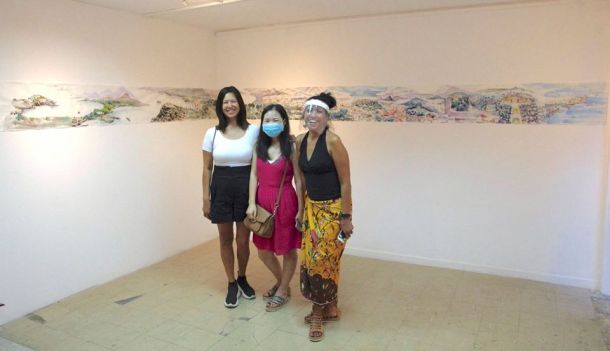 View looking in from the gallery window, with the Nilware team’s digital prints on show 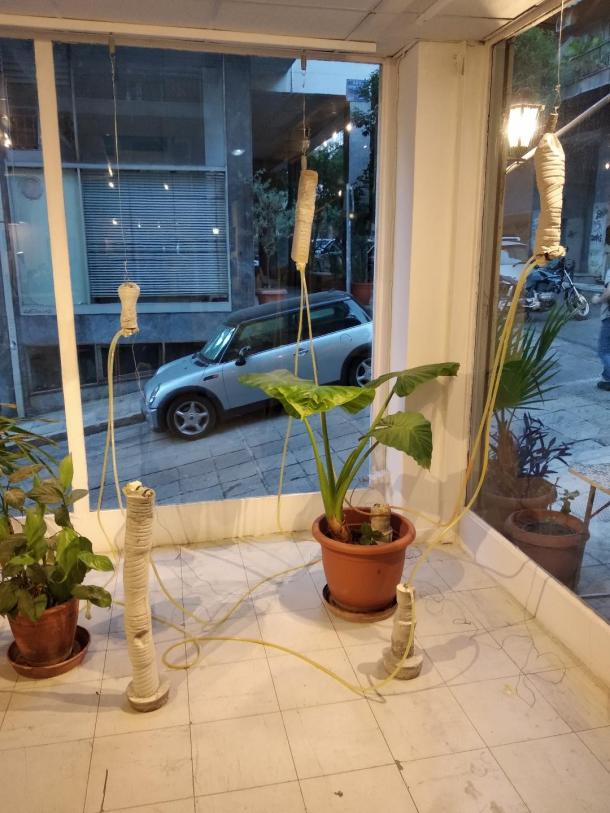 An indepth explanation of the show’s concept, from director Dimitri Yin:
“‘Out of the Cube and Into the Green’ is a group exhibition which examines a less conventional approach to spatial, social and ecological factors in both contemporary art and Athenian society. The exhibition features new works by Stefanos Kornilios Mitsis Poiitidis and Pavlos Paliouras Of Nilware, Vasilis Galanis, Karl Heinz Jeron, Ioanna Lin, Eleni Tsamadia and DimitriYin. The exhibition which takes place at Phoenix Athens Gallery in the aftermath of the Covid 19 Pandemic, reveals the manner in which the “native” ecologies of cities, suburbs and the entire planet has been overlooked and mismanaged with stunning (in)efficiency. The garden or κήπος in Greek is a sacred part of both classical and modern Greek heritage and continues to be a sanctuary that offers respite, healing and inspiration as well as dialectic references for the development of new ideas. The title for this exhibition is thus named since human creativity, science and human understanding is so largely inspired and informed by nature. The term “Green” also refers to the uninitiated or inexperienced, and in some cases as well, those who would be jealous of others. Out of the Cube and Into the Green takes stock of these realities and gives the public an opportunity to reflect on this further, while giving free-reign to artists to explore the idea of the gallery in a perhaps more well-rounded way. Each artist shares a different approach to understanding a world that has been politically and economically delimited by conventional thought and habit. The primordial soup of Jeron’s Cryptid sculptures and accompanying illustrations provide a fascinating model of living vs. nonliving interactions, and a way to reflect further on the metaphysical energies contained by both objects and beings. Vasilis Galanis’ tongue-in-cheek synthesis of Haeckel’s scientific illustrations are informed by ecology and the arresting yet seductive morphology of coral-an organism which may be defined as both plant and animal. The virtual constructions in AI of a surreal museum and its Athenian environs created by the Nilware team (Stefanos Mitsis Piitidis & Pavlos Paliouras) create a paradoxical and telling universe in which a museum resembling the Guggenheim has been placed in a dystopian Athenian landscape. Ioanna Lin’s six meter long panoramic of the city of Athens attests to the strength of her “craft” and demonstrates how the idealism and adoring “gaze” of others can elevate and broaden our appreciation of the familiar. Dimitri Yin’s work is a nod to craft, ecology and the diligent resilience of working Greeks providing insight into our notions of labour, ecology and utility. The works allow us to rediscover the idea of nature and the self as things that can be harnessed, cultivated and better understood through speculative or case-specific models for analysis and creative practice. This exhibition offers a new precedent for reevaluating our relationship with nature as well as a way to re-imagine the gallery as a public space where discussion around ecology, utility and engaged practice are cultivated and given a chance to thrive. Curatorial Notes: There has been a historic divide between art and ecology, as if for whatever reason, these things are not compatible. This exhibition seeks to blur these lines and demonstrate how art is relevant to ecology and the preservation of [human] life on this planet while revealing the ways in which a more comprehensive understanding of ecology and ecological patterns is vital to the development of vibrant ideas and forms in contemporary art. Despite the obvious toll on human lives, the quarantine measures made life for both humans and many other organisms not less, but more liveable. This was apparent in the improved air quality, reduced Co2 emissions, diminished sound pollution and the resurgence of both flora and fauna to urban and suburban areas. The “lockdown” as it would be called, would also put a moratorium on the activities of museums, galleries and many cultural institutions revealing that these still could not be visited by many, nor relied upon exclusively as a source-point for art and artists would continue to create work, thus contributing to society and culture despite all of this. Out of the Cube and Into the Green takes stock of these realities and gives the public an opportunity to reflect on further on the relationships between ecology, art and society to explore how artists rebound from difficult times and continue to serve as heralds of creativity while providing perhaps more enlightening models for human growth and the development of progressive thought.”