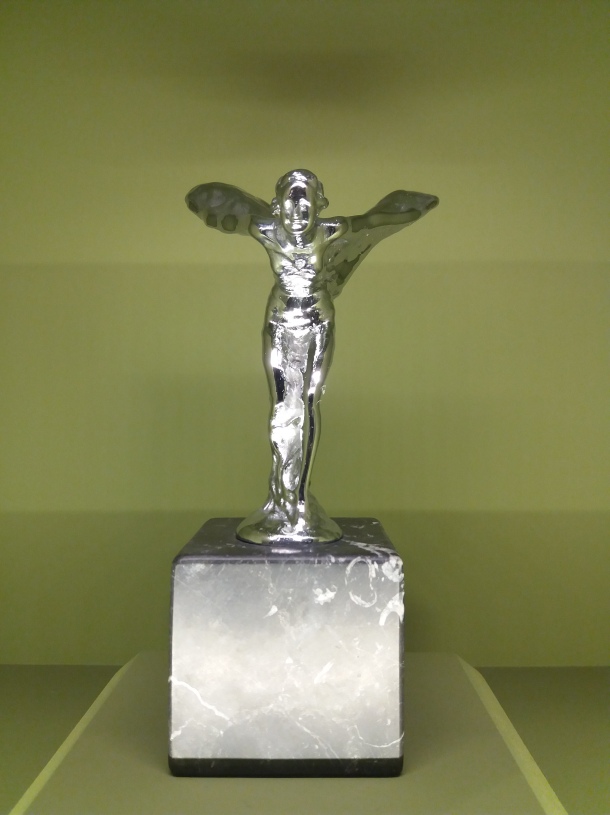 ‘The Spirit of Ecstasy’, was one of the first works you encountered at the Benaki Museum’s ‘Art Nouveau’ exhibition. This small, silver figurine resembles a more modern, streamlined version of the ancient statue ‘Nike of Samothrace’ (in the Louvre). Created by Charles Robert Sykes in 1911, it adorns the bonnets of all Rolls-Royces. It is also a prime example of English Art Nouveau. The show at the Benaki, which ran till May 21, was comprised mainly of design objects from the Badisches Landesmuseum of Karlsruhe, and presented to the Greek public how diversely the style of Art Nouveau manifested itself in Great Britain, France, Belgium, Austria and Germany.

Art Nouveau (also known as New Art) – a movement full of elegance and grace, and plenty of stylized floral patterns – blossomed between 1890 and 1914, especially in the fields of applied arts and architecture. It was an international style with achievements of excellence mainly in Europe, but also reaching as far as the USA. In different countries, this movement assumed different names: e.g. Art Nouveau in France and Belgium, Jugendstil in Germany, Scandinavia and Austria (also Secessionstil in the latter), Stile Liberty or Floreale in Italy.

Although inspired mainly by William Morris, the Arts and Crafts movement, Aestheticisim, Symbolism, and Japanese art, Art Nouveau also changed its style in each country, taking on further local influences such as that of the Rococo in France for example, or moving more towards modernism’s more simplified forms in countries such as Austria and Germany. In Hungary or Finland, Art Nouveau encompassed several other traditional elements, often as a means of advancing its rational identity. 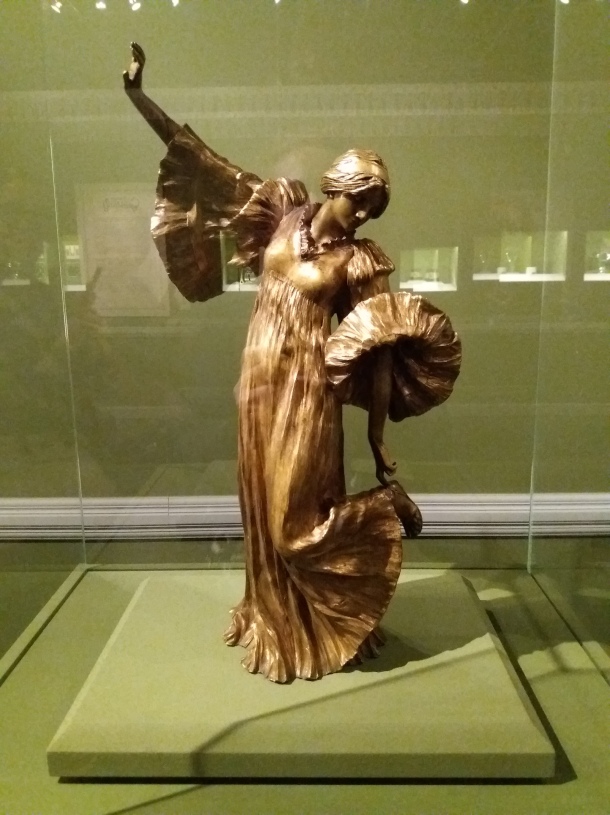 But generally speaking, one could outline Art Nouveau’s main morphoplastic formalities as being those of the stylized, spiral-biomorphic decorative motif (especially in France, Belgium and Great Britain), and abstract geometric construction (developed more in Austria and Scotland). Furthermore, this movement saw to a break from previous historical styles in the most part, and a move towards a more modern form, while also blurring the boundaries between art and design. There was also a move back however, towards the handcrafted object and the reestablishment of artists and designers’ guilds and workshops via this movement.

The exhibition at the Benaki kicked off with Art Nouveau’s ‘precursor’ – the Arts and Crafts movement that flourished in England during the second half of the 19th century. This movement was based on the theories of John Ruskin and William Morris. Its stylized floral motifs influenced the manifestations of Art Nouveau in many countries. The Arts and Crafts movement returned to a guild-oriented handicraft manufacturing process as a reaction to the increasingly industrialized landscape of Great Britain at the time. Feeling that the artist was becoming alienated in the new industrial age, this movement instead tried to reconnect the artist/artisan with the final creative artistic product. 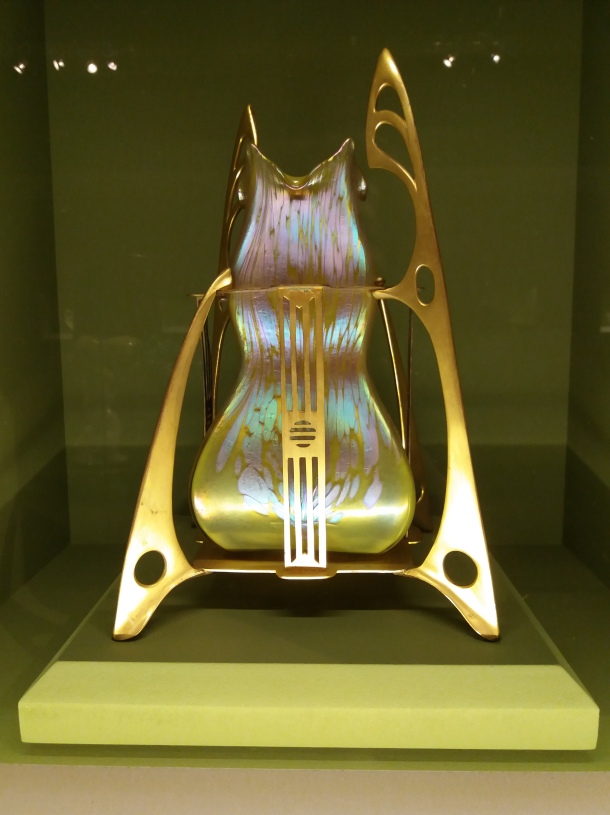 Next up, was a look at French Art Nouveau, which stands out for its grace and elegance and its highly ornamental character, with a penchant for fluid, linear, lyrical forms and floral decoration. Paris and Nancy were the main centres of Art Nouveau in France. Famed designer Emile Galle came from Nancy – he took the emphasis on natural forms in Art Nouveau further, by studying botany for his designs.

Belgium’s contribution to Art Nouveau is especially evident in the work of architects/designers such as Victor Horta and Henry van de Velde, the latter being especially influenced by the Arts and Crafts movement and Japanese art.
Austria and the Viennese Jugendstil (or Secessionstil) after the society Wiener Secession is mainly distinguished for the static-geometric morphoplastic vernacular formed upon structural elements. In this regard it lays in strong contrast to the organic-floral designs of the French Art Nouveau. 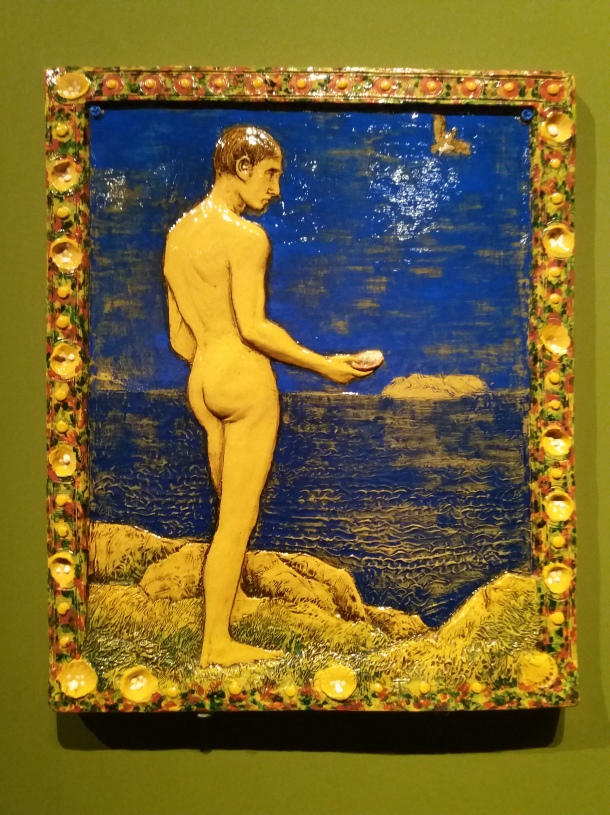 In Germany, Munich was one of the prestigious centres for the Jugenstil, but workshops also developed in Dresden and Darmstadt.
The exhibition ended with a focus on Karlsruhe, the capital of the State of Baden and seat of the Grand Duchy. The proliferation of Jugendstil in Baden was underpinned by the School of Applied Arts in Karlsruhe where prestigious artists studied and taught. It was also famed for its majolica ceramics.

Today, Art Nouveau still lives on in the Liberty & Co shop on Regent’s Street, next to Carnaby Street in London. They also have a lovely site with many gift ideas, for those who still want a bit of Art Nouveau in their lives.